Return Of The Legend

Wolfenstein: The New Order certainly left us hanging off the edge of a cliff didn't it? A hard fought victory in a frustrating-but-rewarding boss fight lead to series hero William J. "BJ" Blazkowicz on the edge of his own demise. In a final act of valor, it seemed our hero's story just may have finally been coming to an end. But, any discerning gamer knew better. Not like that, BJ is too much of a mix of iconic soldier and heartfelt human to let a few cuts, bruises, and exposed intestines take him down.

Wolfenstein: The New Colossus begins immediately where The New Order ends, after a brief recap of the events of the first game. Critically injured, BJ fades in and out of the present situation as friends and loved ones work to save his life, and a past far beyond what we've known of BJ to date with one of the most brutal, gut wrenching scenes I've ever experienced in a game. I was angry, I was uncomfortable, I had tears in my eyes; I'd just experienced the narrative power Machine Games was aiming for with the second mainline outing of the modern iterations of the series.

Everything I loved about The New Order, and its smaller prequel title The Old Blood, was amplified, revved up, and ready to unleash war. Whether it's a more gripping narrative, or more satisfying shootouts and general gameplay, Machine Games came ready to make an impact in a genre that is now constantly struggling as far as gripping single player experiences go.

We learned during The New Order that the United States of America was forced into submission after Nazi forces dropped the Der Bestrafer (If I translated this correctly, The Punisher) atom bomb on New York City ending hundreds of thousands of lives in an instant, and forcing President Truman to surrender to the Reich. News clippings, documents, various encounters with memorable characters such as Wyatt and "J" grant bits and pieces about the story back home, but mostly the true state of America was left enigmatic.

No more, after the opening levels of the game take us from the bowels of a U-boat and airship, we finally make landfall in the USA; at Ground Zero of the final nail in the coffin for the defeat of Allied Forces no less. Stepping into the remains of NYC - a massive graveyard of destroyed structures and skeletal remains with radiation all around and hidden Nazi search parties among the fog - is your first step onto American soil and a strong reflection on defeat. It is darkness before the light as a resistance slowly takes form. Throughout the game, BJ will head to several different locales ranging from the desolations of ruined cityscapes to townships where the new 'normal' is Nazi propaganda. The population, living in a complacent fear and trying to live normal lives, feel like all was lost. Even those who were free of the more brutal Nazi persecution, were prisoners to the new regime. In an effort to push the narrative further, The New Colossus does not shy away from portraying a view of Nazi sympathizers as well; from Klansmen to young women cozying up to Reich officers. It's a jarring sight to see, but we've seen sympathizers on and off throughout the decades since the end of WWII, just not often in a video game.

The story manages to be both more heroic and darker, and acts as a driving force for the player’s actions beyond just stopping the Nazis. I couldn't be happier about that. Perhaps my only gripe is that there are a select few times where BJ seemed to go out of character in jarring enough way to break my immersion in the game.

But it's not just the story that satisfies! Wolfenstein: The New Order featured some of the most satisfying gunplay since the original F.E.A.R. with a formula that encouraged varying play-styles between run and gun, tactical cover, and stealth situations. While gameplay remains largely the same, levels are by and large more open and varied and give the player more freedom to make each and every combat encounter unique. The changes to the game’s combat offer a more rewarding way to switch up your dual-wielding weapon antics, and a more rewarding melee combat system.

Dual-wielding previously only offered the ability to use two of the same type of gun; now you can do so in any number of combinations. Want a silenced pistol in the left hand while you have a rifle ready to go loud and proud in the right? Sure why not? A shotgun and the grenade lobbing Kampfpistole? A bit of overkill, but sure why not! You can get really creative with your approach to some of the heavier gunfights. I often found myself opting for one weapon at a time just for better accuracy, but there are plenty of times you'll throw caution to the wind in favor of the pure adrenaline rush of slaughtering the enemy.

For when you want to get up close and personal, melee combat has been tweaked up quite a bit. Going from the base execution moves and swings from the first game, BJ can now get in the face of the enemy with some rather brutal bludgeonings, stabbings, and even dismemberments. I personally like the sweeping-the-leg animation with the hatchet, nothing like the sudden scream of the enemy being cut down to size and then silenced. Odd little factoid: despite the scream the hatchet attack is counted as a stealth attack but in reality is one of the loudest melee attacks possible in the game.

Overall, Wolfenstein II: The New Colossus is exactly what a sequel should be. It doesn't try to make drastic changes, it tries to improve upon what made the first game so enticing and such a stand out in 2015. The end result comes out as something that accomplishes that end, and yet more. By changing things just enough from a gameplay perspective, changing the locales and daring to take the story down an even darker path, Wolfenstein II: The New Colossus has kept the fun while also making the player feel the emotion of BJ's battles, his pain and rage, even his heartbreak. Unless you have an unwavering core, this game will take you on one hell of a rollercoaster ride of emotions, guns blazing all the way.

Improves upon its predecessor across the board, good replay value

A few stumbles in BJ's character occasionally break the immersion 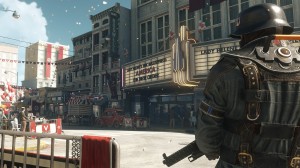