Asymmetrical multiplayer was at the tip of everyone’s tongue earlier this year with the release of the immensely well-hyped Evolve. The concept is quite simple: while some players take on roles with varying power, the different teams should have roughly the same chance of success. This is accomplished by having a disproportionate number of players on each team. In the monster hunting shooter Evolve, one player plays the extremely powerful monster while four others play the hunters, banding together in their attempt to bring down the big guy.

Velocity Stream brings the same concept to the racing genre, but could have used a bit more time in the oven.

Birth of a Brainchild

Have you ever stared up into the sky during an aerobatics show, fixated on the trail of smoke left by the planes as they swerve and swoop through the sky, and thought to yourself: “I really wish I could race one of those”? That thought was the spark of inspiration that lead to the creation of Velocity Stream. As one player flies around on a big, bulky behemoth known as the Paver, the rest of the players race on the track it leaves behind trying to catch up. If the Paver crashes, runs out of time, or one of the players catches up with it, it loses. The allotted time can be extended by reaching checkpoints and traps can be picked up which serve to slow those pesky freeloaders chasing your tail down.

The racers compete in their attempt to catch up to the Paver and the first one to reach it automatically wins. If the paver crashes or runs out of time, however, a goal post is created and the first one to cross it is victorious. If the Paver manages to get so far ahead that the race track disappears from under the racers, it reigns triumphant.

While the racers are battling each other, they quite often come into contact with one another. This bumps the receiving racer quite a bit and sent me off the track more than a few times during my gameplay. Luckily, you soon reappear on the track and, assuming you haven’t fallen too far behind, can resume your pursuit. The racers handle quite well and drifting is fun, but the difference between the King, the slowest racer with the best handling, and Valkyrie, the fastest and least steady one, is pretty drastic. There is no middle ground while that would have been appreciated.

Asteroids do not concern me, Admiral!

As the Paver, your objective is to lose the racers, but as you fly much slower than they race, you’ll have to make the track as complicated as possible in order to achieve this, all the while going after the checkpoints to make sure you don’t run out of time. The paver has a boost which, when depleted, can only be recharged by flying close to solid objects. This is when crashing comes into play. The game currently features three levels: Forest, Asteroid, and Empty Space. Forest and Asteroid are fun to fly around and the checkpoints are clearly marked on them. Empty Space, however, is good for the creation of complex tracks, and it is the only map to offer an AI controlled paver, but the checkpoints are initially beyond the draw distance of the Paver, so you’re unlikely to know in which direction to head in order to extend your time. An indicator of some sorts would have been a huge help here.

While the game is a hoot-and-a-half to play, a number of bugs impaired the experience. Starting with a bug that made it difficult to find servers, then having to force-quit the game after entering a situation where no interface presented itself, and culminating in becoming stuck inside the track after falling off, the game felt a bit like a late stage Early Access title rather than a full release. The developers have stated, however, that not only are they continuing their work on it, they will also be rolling out more maps, traps, and game modes in the near future. While they are determined to support the title long term, I’d argue that focusing on bug-fixing and polishing the current build should be their priority.

The Tron-like visuals and the Sega Rally-esque physics create a racing game reminiscent of the original WipEout. The track is being created as you race by either an AI or another player, remembering the track will not help at all. You’ll have to learn to read the curves of the track and, if you often race against the same people, you may even learn to anticipate their moves. The more I raced, the more I liked this game and I personally can’t wait for the local co-op mode to arrive so I can throw it up on the big screen when my friends come over. As it stands, the frantic racing, the quasi-randomly generated track, and the joy of bumping your friend off into the darkness of space in the middle of a turn are almost enough to make you forgive the game its bugs and lack of polish. Almost. 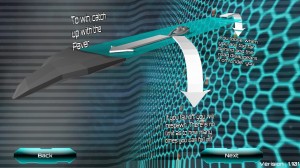 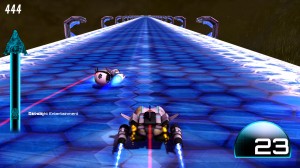 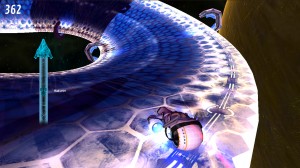