So it might be better to refer to Two Point Hospital as the spiritual successor to Theme Hospital. Alternately you could call it a Theme Hospital for the modern age, channeling much of the original games wackiness and hospital management with a sprinkling of new features and a significant graphical overhaul. In Two Point you take on the role of a hospital manager, assigned to various hospitals, building them into successful and efficient institutions. As you progress through the various hospitals you’ll be presented with strange and terrifying illnesses, but also with new rooms and treatment facilities, giving you the means to cure them. The more you cure, the more money you make and the more successful your hospital will become; simple really! You’ll also manage your staff, keeping them happy and attending to their needs, as well as building comfortable areas in which your patients can relax (when they are not being, poked, electrified, prodded or disassembled.)

Players of Theme Hospital will remember the strange plethora of ridiculous ailments that they were faced with; from invisibility to inflated hands. Two Point really manages to carry the torch in this regard, giving you a huge number of strange illnesses to deal with and a large variety of treatment types. In this sense, your hospital will constantly expand throughout the game, so that keeping up with demand becomes a real challenge. Especially when you consider that if you have to turn a patient away, your reputation will go down, but by the same token, it’s not financially viable to build a treatment facility for one patient. This is the balance that must be considered as the game goes on.

The player must also have a pretty good sense for interior design and the efficient use of space. Theme Hospital players will remember trying to space couches, plants, vending machines, bins and fire extinguishers throughout rooms and Two Point’s interior design feels much the same. You’ll end up frustrating yourself, building rooms based upon the initial demand you think they’ll see, but then having to expand or shrink other rooms to accommodate demand (an experience which I’m sure actually reflects a real life struggle in building use.)

Even after all these years, Theme Hospital is still a pretty mechanically sound game. Players have fond memories of Bullfrog’s classic Theme series, and I think there is more to that than just nostalgia. The combination of wackiness and sim that those games use, is a really classic formula and one that I believe players still enjoy even now. Two Point Hospital doesn’t change a whole lot, but I don’t think it necessarily had to; the best kind of spiritual successor is often one that channels the original, yet remains fresh and adds just a dash of innovation. Two Point adds that freshness in graphics and art style, as well as a whole host of new illnesses and challenges, but also channels the wackiness that was so prevalent in Theme Hospital. It makes me excited to see what successful Bullfrog re-imaginings we might see in the future of Two Point Studios.

Plays it a bit safe with the formula. 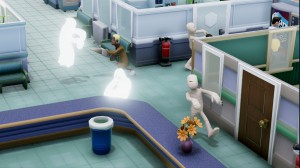 Fursan al-Aqsa: The Knights of the Al-Aqsa Mosque