Welcome to The Division

Scenario: An outbreak of a modified strain of Smallpox is released into the population of New York City on the busiest shopping day of the year, just weeks before Christmas. The government is forced to contain the situation, putting the city under quarantine. The number of sick and dead is rising quickly, and those who are able to avoid illness find themselves becoming either predator or prey in a desperate fight for survival. Looters, escaped convicts, misguided municipal servants, and even a private military contractor have effectively made a bad situation far worse for the people left behind in Quarantine. This is where the agents of the secretive Division come in.

They could be your friend, your neighbor, your own family, and you would never know until they were called to action. The Division is the last line of defense where all other feasible options have been exhausted, and the outbreak in NYC is their maiden voyage. Massive sets the stage very quickly letting you know in opening moments just how high the stakes are. Can the Division save a dying city? More importantly, will the player have fun doing so? Since launch day, I've invested every moment of my free time traversing the decimated streets of the latest Tom Clancy title to see if they could capture that blend between a third person shooter, rpg, with a flavor of faux MMO. Forty-two hours later, I think it's more than time to weigh in with my thoughts. Before I continue, I have a big piece of advice; FORGET REALISM. Forget realism for this game. I know it's hard, as Tom Clancy games are generally all about quick and efficient kills and pinpoint tactics. While the tactics remain, the game is much more of an RPG than you would expect.

Before you drop into the world, you need a face to make your agent your own. While cosmetic customization is abundant in terms of clothing acquired in game, the same can't really be said for actual character creation as I found it to be very limited. While there were several faces to choose from, customization beyond that was rather bland. Beyond very minor tweaks, there were only the preset options of face, hair, and markings to choose from. There is an accessories category as well which does allow for a bit of an extra touch, but considering the finality of your choice in customization I veered away from anything. What I ended up with looked like a younger Liam Neeson, which is a good substitute to fill the void of being able to make something more akin to myself.

Soon after, I found myself in the tutorial area which consisted of a portion of Brooklyn. It's a relatively short section meant only to set the stage for your agent, and to ease you into the gameplay elements before ending with a bang. After the tutorial, players find themselves on the shores of western Manhattan in the largest of all the community hubs in the game, The Hudson Refugee camp. These hubs, and the PVP/PVE "Dark Zone", are where the game most feels like an MMO as it is here where you can see and interact with other players that are outside of your group. It lends itself to the idea that you're not the only agent out there, and it's a great way to make new friends (or in the Dark Zone, a great way to make hated enemies). When you're not in these areas, you are in phased versions of the game world where only you and up to three of your friends can roam. While the idea of a full-fledged MMO aspect for a game like The Division sounds good on paper, in this case it works better to only have player interaction sometimes. The Division is supposed to be a scarce last-line of defense, not an army patrolling the streets of NYC.

Missions, The Dark Zone, And Everything In Between

The central goal from a narrative perspective is for players to take back the city from the hostile elements, with hopes of finding a cure for the "Green Poison" (or Dollar Flu as it is also called) outbreak. This narrative is carried out across several main story missions, as well as over two hundred collectibles spread throughout the game. For the most part, these missions serve as very exciting set pieces that really put an emphasis on how dire the situation at hand really is, and they're almost always accented by at least one boss encounter. Let me tell you, when you and your friends are staring down a group of flamethrower equipped elite mobs in narrow quarters while avoiding a boss with a much greater range, you get a rush that often feels like it's missing from co-op experiences. Another scenario had us dodging sniper fire while dealing with rushing adversaries before we could take the time to focus on the boss, so on and so forth. Many of the boss encounters don't really have much to their character to offer, but they sure are a fun way to send off on a mission.

However, the objectives of the missions are often very basic and usually consist of getting from point A to point B while stopping to retrieve items, intel, or an NPC along the way. I will say this is one game where I don't absolutely loathe escort missions when they decide to show up, as the friendly AI is normally competent enough to get to cover and stay low. The objectives themselves may not seem all that special, but the settings and the fighting in the missions make it very easy to look passed that and enjoy it more as thematic encounters to get to the story rather than center stage to the story itself. The bulk of the story plays out through collectibles and exploring the environment, both of which I encourage as if you solely look for it in the story, you're going to miss out on how engrossing the narrative actually is. It may not be anywhere near Tom Clancy's level of writing, but I think even he would've appreciated the overall tone the game supplies.

The side missions aren't nearly as impacting, but are still fun time sinks giving you plenty of excuse to take down some baddies for loot and exp. There are a few that break the mold, such as the ones that involve determining the fate of missing people, but most of them are either attack or defend missions that are over within less than 5-10 minutes each. The sheer amount of them makes sure you won't run out of things to do very quickly, but if this game isn't the kind of grind that takes your fancy you probably aren't going to enjoy it as much as I have. Once you reach the level 30 cap, you unlock daily missions which give you rewards for completing previous content on higher difficulties, and helps you get ever closer to the high end gear you'll so desperately seek.

Last, and least, comes the Dark Zone. Right now, the Dark Zone is the place to go for some of the best gear the game has to offer. In this PVP/PVE zone, players are let loose in a hostile environment with the sole task of collecting loot to extract back for personal use. My experience with other players has been mostly friendly, but I've learned to be wary of the groups of Rogue Agents who commonly traverse as a pack to pick people off for easy loot and experience. The Dark Zone is a thrill ride of its own, but right now feels extremely bare bones. There needs to be more to an area that's about 1/3rd of the map than just a killing field.

When you get right down to it, the main goal of the overall game is that ever enticing loot cycle. In the same way that Diablo, Borderlands, and Destiny, just to name a few, keep players hooked with loot drops, The Division has sunk its hooks deep into me. I'm always on the lookout for the next big upgrade.

We Are The Division

The numerous other players out there, my friends, me; we are The Division. This game that could've gone so wrong, so easily, is already off to a great start with more content both free and paid set to come over the next year. There is a lot of room to grow, especially where the Dark Zone is considered, but right now I've had a lot of fun and now that I'm wrapping up this review it's time for me to get back into the field. Agent Irwin, out.

Addictively fun shooter/rpg gameplay with a heavy emphasis on loot, intense boss battles, enjoyable narrative with collectables that really flesh out the story, a massive amount of cosmetic clothing to make up for basic character creation 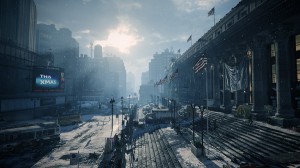 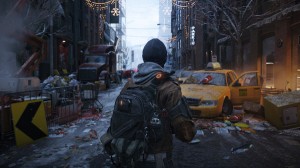