The Dark Stone from Mebara launches as a tiny window on the desktop, hilariously dwarfed by modern resolutions. Full screening the program blows it up into an ugly, pixelated mess. Its retro aesthetic is partly due to the limitations of RPGMaker, the program used to create it. The game begins in the Pendleton agency, a dusty-brown office in 1924 Massachusetts. You play as an awkwardly-animated private detective named Monroe and are tasked with the investigation of a mysterious murder.

Leaving the building, I venture out onto the street. It’s a small, flat-looking strip of grey lined with some very odd looking parked cars. There are invisible walls on either side of the street and a fifteen second music clip loops (with an awkward pause between each play). It’s not very atmospheric, and it’s horribly ugly. I decide to snap a screenshot anyway. The game crashes – not the best first impression!

Ultimately, you’ll be thankful that the screenshot functionality is broken. Yet, The Dark Stone’s archaic aesthetic is in fact its strongest quality. It’s a smudged mess, filled with poorly edited music (piano + whispering) and horrifically drawn creatures – but all of that is relatively consistent with the Lovecraftian tone and the occult story The Dark Stone of Mebara wants to tell.

The turn-based RPG battles on the other hand are unforgivably jarring. They add nothing to the narrative and detract greatly from the overall setting and mood. These battles are thrown haphazardly between Monroe’s moody narration and the dialogue between the three, indistinguishable, Pendleton agency characters. Dark themes like sanity and the general fragility of the human mind are mere numbers in Dark Stone; stats grow and shrink with the use of basic abilities rather than being interesting mechanics which add a sense of dread.

Each battle is a lesson in frustration. The fights are straightforward slugfests where critical hits, misses and evades pop up randomly, and with devastating effect. Fights frequently require you to reload from a save, and with poor healing options, you can quickly paint yourself into a corner where progression becomes near-impossible. I suppose the combat system’s complete indifference to the misery it inflicts is, ironically, a sort of Lovecraftian theme.

Why the Old Gods no longer cut it

This weird mystery tale of cultists, mystical rocks and cosmic horror could have benefitted from having few fewer dimensions. There are limitations with RPGMaker, but To The Moon showed that not every game made using the program need shoehorn in turn-based battles in the style of a Super Nintendo RPG.

As it is, The Dark Stone is a completely uncomplimentary mix of basic literary conventions and obnoxiously bleeping “level-up” screens. When there are games like Sunless Sea so confidently stripping back obtuse and outdated mechanics in favour of telling a story and setting a particular mood, such a contradictory mix becomes unforgivable. That The Dark Stone of Mebara is also technically cumbersome is just the final nail in the coffin.

Happens to be inspired by Lovecraft

Horrible and frustratingly difficult combat, the RPG mechanics are completely antithetical to the mystery adventure, technically poor and even broken in some cases 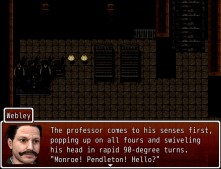 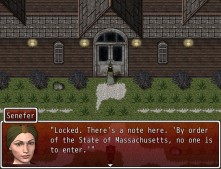 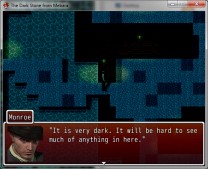 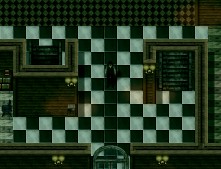 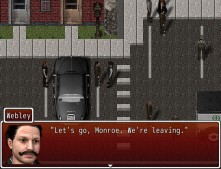 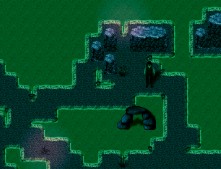