There is a semblance of a plot – about how you are an operative for a secret organisation known as Argo Express, and two paragraphs explain the context of why you’re in a giant mech suit shooting other giant mechs in the face, but if you need an explanation for the justification of what you’re doing in this game, you may need to reassess your life choices (and maybe play another game).

The game’s pace strides forward like the giant mech featured in the game: steadily and relentlessly. Rushing forward into firefights will see you annihilated very quickly, even on Easy difficulty. If you’ve played any 2D side-scrolling platformer/shooter since the beginning of time, you’ll know the drill; shoot the enemies until they explode, avoid traps and falling to your death, and pick up health and power-ups as you go. Every now and then you’ll even be tasked to kill an oversized boss or mid-boss. You have a vast array of weapons to add to your arsenal as you blast your way through each level; these are all standard shooter weapons, there are no real surprises here. Weapons can be upgraded through pickups, but that is about the extent of character advancement; this is no Front Mission: Gun Hazard.


The mechanics are sound, as you traverse the levels with the left stick/keyboard and aim your weapon with the right stick/mouse. The aiming control can initially feel a bit twitchy, but you do get used to this over time. You also have a jetpack which allows for slight manoeuvrability for a limited time, which does lend a little bit more depth to the gameplay than merely running from left to right. Direct movement control is responsive, and generally if you do die it’s mostly your own fault and slow reactions as opposed to the game being unfair.

Graphically, the game stays true to its roots and influences, and wouldn’t have looked out of place on the Super NES or Amiga 500, albeit with a slightly more washed out colour palette compared to, say, Contra. Sprites are clear and well defined, and would have passed for a full-priced game if it had been released in the decade that it so heavily emulates.

One feature that points towards this being more of a purpose-built PC game as opposed to an arcade or console conversion is that you are able to save your game at any point, an unusual feature considering how used we are as gamers to playing through normally checkpoint-heavy games. There is an auto-save at the start of each section if you only wished to use that, and it could be argued that judiciously saving every few minutes takes away the challenge of the game, but how you use this is entirely up to you.

Ultimately, how much fun you get out of this game is purely down to how invested you are in the genre. There is a strong sense of ‘been there, done that’ for anyone who’s played a game like this; there’s nothing here you wouldn’t have already seen in a dozen other games of its ilk. It’s debateable whether this is a compliment to the authenticity with which Astro Port have crafted the game, or if it is a slavish adherence to previously established mechanics and art direction meaning whilst the game is mechanically sound on its own merits, it fails to push the genre in any new direction. This may not necessarily be a bad thing if that is exactly what you want, but anyone looking for a fresh new gameplay experience may leave more than a little disappointed.

Whilst it may not be the prettiest shooter out there, Steel Strider sets out to do a specific number of things and succeeds in those areas. Its subtitle is ‘Real Robot Action Shooting Game’, and apart from some argument as to the validity of the first word in that sentence, the rest of it is a fairly accurate description of what it does. The game’s low price point also means that for fans of the genre its purchase is a no-brainer. For anyone else, this game won’t convert you.

If you played shooters in the ‘90s, you’ve already played this game 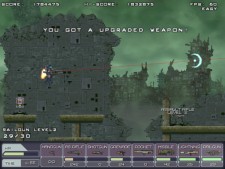