It has Sid's name on it, so it must be good

I have played enough games to know that I should never go into a game with set expectations, but it doesn't always work out that way. When we received a copy of Sid Meier's latest monikered title Ace Patrol: Pacific Skies, I did set some lofty expectations, and for good reasons too. Firstly, Sid Meier. Few people in the industry have a better track record than him. In fact, he may well be the one who lured me into gaming with classics like Pirates and Railroad Tycoon - I'm talking about the Commodore 64 and Amiga versions here, not the more recent remakes. Secondly, from the glimpses of the game that I had seen prior to release, Pacific Skies looked significantly like Wings! which is my favourite Cinemaware game from the same era. My expectations certainly set me off on the wrong foot.

Pacific Skies is a follow up to the original Ace Patrol and has you playing the role of either the US or Japanese during World War 2, playing out air battles based in the Pacific region. Missions take place in various locations around the area and feel very much like a turn based board game. Mission types range from destroying battleships, to defending a base against an enemy bomber or fighters, preventing a plane from taking aerial photographs and rescuing fellow pilots from POW camps.

Chess on a Pacific battlefield

Starting is easy; simply choose which of your four pilots will go out on the sortie and then wait to be taken to the board where each of the players will start from opposite sides. Turn by turn, pilots move towards their goal - which greatly influences the course taken - by selecting from a list of available flight manoeuvres. Another major influence in your decisions is the quality of the opposition airmen who will not only follow their own agenda but will attempt to delay yours as well.

The turn based nature of the Pacific Skies makes the game feel somewhat like a miniature chess game, especially early on when the pilots have limited skills and planes lack upgrades. These come with practice though. After each mission - whether it was a victory or failure - a score is calculated. The score for each mission is based on completion of mission goals, damage delivered and damage sustained. If you did well, upgrades may be made available that can be used to improve pilot's skills, enabling them to perform more complicated manoeuvres and gradually adding to the bag of tricks that can be used to aid them in the aerial battlefield.

Aircraft modifications can also be earned for playing well during missions. Upgrades such as improved machine guns and better airfoil for greater turns certainly help in battle. As the war progresses, new planes also become available. This can be a blessing, but can also be a hindrance. The new planes do not come equipped with all the current plane's upgrades, so you may have to decide between keeping a fully kitted older plane or upgrading to a better plane with no add-ons.

I grew up in an era of the pixelated graphics of the Commodore 64 and old school visuals don't bother me in the least, as long as the gameplay is fun. Great visuals are just the icing on the cake and luckily Pacific Skies' fit the style of game quite well. It may be set in a theatre of war but it almost plays out like a cute Disney movie complete with vibrant colours not normally associated with serious war games. The pilots have a somewhat cartoonish look to them, and the settings are fairly plain in their Risk-style board game set up. The look of the aircraft and naval fleets complete the arcade feel.

The swinging band tunes between missions fit the era superbly and add to the overall ambiance. The voice acting, however, does not surpass 'decent'. The snippets soon begin repeating themselves, both from your own pilots and those of the downed enemy. The same goes for the run of the mill sound effects that consist of airplane propellers, machine gun fire and the sound of planes crashing into the ground or sea. You've heard it all before, but it does the job.

Sid Meier's Ace Patrol: Pacific Skies isn't what I was expecting. It did not have the depth I expected from a Sid Meier game, or the charm of Wings! for that matter. Initially I was a little let down by it but after playing through for some time, Pacific Skies did grow on me somewhat. The pilot skill upgrades certainly add an extra dimension to the game and the choice between using a kitted out older plane or a fresh, un-upgraded new one is as tough as it sounds. Part my disappointment stems from the fact that the game's more interesting phase starts a little later into it. The early manoeuvres are quite boring but once you gain the experience to learn new flying techniques everything feels a bit more dynamic. Once you get to that stage, Sid Meier's Ace Patrol: Pacific Skies is a nice bit of casual fun.

Looks and feels like something out of the 1990's 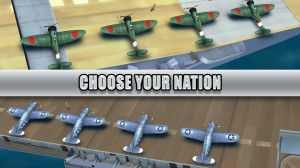