Once Upon a Time in the West

Dutch called over to me. “It’s up to you, Arthur”.
We were all close together, hidden from sight from the O’Driscolls. We were amongst the farmhouses, just waiting for the right time to strike. It was cold outside, and I wanted to get this over and done with as quickly as possible, so that I could get back to the warmth of the fire back at our meagre lodgings. I took aim at the unsuspecting foe, pausing as I steadied myself for what lay ahead. I squeezed the trigger and my unnamed target slumped to the ground. By the time his compadres had a chance to draw their revolvers, three more of them were down as Dutch and the rest of our posse opened fire. A few more came rushing out from a nearby barn, but by then, they were outnumbered and quickly received the same fate as their companions.

The O’Driscolls were a mean bunch, and even though those who had just been felled may not have deserved their end, our little community was cold and hungry. And they were our priority now – we wanted to keep them all alive. Dutch and his crew looted the area for anything that would serve. Food, money, ammunition – it was all valuable in the untamed west – and we headed back to our little camp satisfied that there were a few less outlaws to contend with.

Red Dead Redemption 2 has the player taking the role of Arthur Morgan, a member of a small band of outlaws known as the Van der Linde gang. Their leader, Dutch, is somewhat of a father figure to Arthur and many of those within the gang. They have been slowly building their fortune so that they could start a new life, but an incident at Blackwater went sour, forcing the group to flee and leave their fortunes behind. As Arthur, you begin your new life, hoping to regain the riches once lost.

A Fistful of Dollars

Setting up in a camp not far from the town of Valentine, Arthur and the crew go about their business, with several of the team assigned special tasks for the group. As Arthur, you will help each of them out with their required roles. Strauss, the group’s loan shark, will ask Arthur to collect on the debts whilst Pearson, the camp cook, will ask for items with which to use for cooking. And, of course, there are the O’Driscolls and other bandits to watch out for.

But you are free to wander about and do whatever you want. Apart from the gunslinging that the Wild West was best known for, there is a lot to do in and around Valentine and the other one-horse towns. Arthur and the Van der Linde gang need to be nourished to perform at their peak, and although they can scavenge food by looting, hunting and gathering for food could be considered more desirable. Hunting animals has the bonus of both providing meat for nourishment and pelts for warmth or for selling. Vegetables, mushrooms and herbs can also be collected and used to eat or in crafting – particularly for tonics that aid in recovery of health and stamina.

Much of this can also be bought from the stores in town. The towns are the best place to learn what is happening around you and are often the best places to make money. Bounties can be chased, items can be sold, and money can be won from gambling. Be warned, though, if you’ve been on the wrong side of the local law, the towns can be dangerous places to enter, with everyone out to gain the bounty that has been placed on your head.

Building rapport with both people and animals is an important aspect of the Wild West. People act differently towards you depending on your reputation. Take a heavy-handed approach to everything, and people will be out to challenge you, or even distance themselves from you. Animals too, such as your horse (or horses, as the case will most likely be) need to be cared for. Your horse is your transport across the country, and so they need to be well tended so that they function at their utmost. It is a wide land that needs to be covered, and your stallion is your means to travel between quests.

With limited fast travel abilities, traipsing across the countryside can be a monotonous affair at times. Well, it would be, if the countryside wasn’t so gorgeous. Deer and moose wander around nibbling on the grass, birds take flight as you approach the trees they’ve been sitting in, and fish leap out of the water. Water ripples over rocks, the wind sways the trees and the shadows lengthen as the sun dips below the horizon with day and night cycles adding to the realism. I must admit that on numerous occasions, I set a waypoint, put the game into Cinematic mode and sat back and watched as Arthur Morgan and his steed meandered through the stunningly detailed environments. There is just so much going on across the landscape. On too many occasions to count, when I was riding towards a quest location, I was drawn by things occurring off the main track.

The wonderfully written dialogue enables both the backstory of Blackwater, and the current happenings to flow effortlessly, with life going on around Arthur. Characters interact with Arthur, each being fully voiced, and with their own tone. When wandering back into the camp, it is easy to determine who is calling out to you, simply by their voice. And although the voice acting is superb, it is the background music that sets the benchmark for the game, particularly during the cutscenes. From the haunting violins, to the cheerful acoustic guitar, you can always tell the mood of the characters and their predicament at the time. And even though you’ll be hearing the clop, clop, clop of the horse’s hooves, they will change depending on the surface you’re riding. Minor details such as this increase the immersion into the story.

The control scheme, although it works fine, is my least favourite part of the game. The controls seem like they have just been ported from the console versions of the game. Selecting weapons via a scroll wheel on a console is fine - due to the lack of button options on a controller - but with a PC, these should be selectable via a press of a single key (using the numerical keys or the function keys, or even the mouse scroll wheel) to choose the desired weapon. But this slight frustration aside, the controls do an adequate job. The core controls of shooting, hunting, and riding are extremely simple, with new mechanics introduced slowly during the introductory chapter.

How the West was Won

With the ability to play Arthur as a full outlaw on the run or as a kind-hearted scoundrel, Red Dead Redemption 2 has a gameplay style for everyone. Of course, whichever game style you decide to play, different consequences will result. And that is the beauty of Red Dead Redemption 2 – you are free to ride your own path. And what a breathtaking path it is to ride. The mountains, the trees and the landscapes are so detailed that you can almost smell the pine trees as you gallop through a forest. With the sounds of nature in your ears, the brilliant musical score and an authentic western storyline told by a range of wonderfully unique characters, Red Dead Redemption 2 is nigh on perfection. When the game was released for the major consoles last year, I was annoyed. As a PC user, I was still waiting for Rockstar to release the original Red Dead Redemption on PC. Well, that never happened, and a year after the console versions were released, I was beginning to think that Red Dead Redemption 2 would suffer the same fate. But I’m happy to say that it has finally arrived, and it is a glorious cinematic gaming experience that was well worth the wait.

Control scheme could have made better use of the keyboard and mouse. 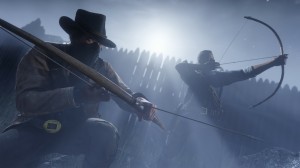 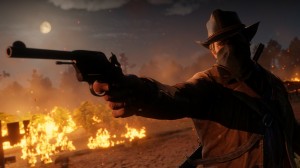 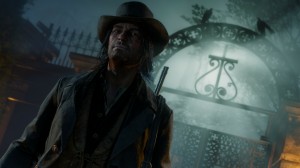 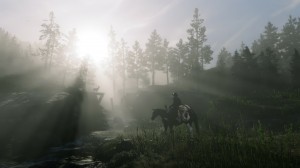 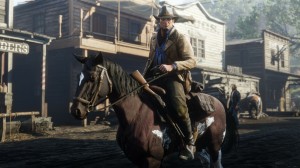 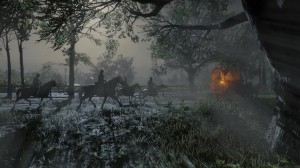 The beast with the lot