Breaking free of the pre-release cell

Prison Architect is the latest game by indie British developer Introversion Software, previously responsible for critically acclaimed real-time strategy gems Darwinia and DEFCON. Taking their considerable knowledge of real-time strategy, they have now applied their knowhow to a slightly different scenario: high-security prison management. Having been first crowdfunded back in 2012, the game’s alpha release has already sold over a million copies, and now it’s broken free of its pre-release cell and tunneled its way onto the game charts.

The game’s title is a slight misnomer, as you are not simply tasked with constructing prison facilities (as where would the fun be in that?); that is just one part of your role. The second part involves actual management of the prison you’ve built, from juggling resources to ensure that prisoners are well-fed and kept in line so they don’t riot to choosing where guards patrol the prison grounds. There is a lot to take in in the interface and the control that you have over the game, although this soon becomes second nature and the campaign effectively acts as a tutorial for the full sandbox experience. Everything from placing power lines and water pipes to direct electricity and water to choosing where to place tables in the mess hall is there for those wishing to manage every minute detail of their prison.

Some may find the aesthetics and tone initially jarring: the top-down view of the prison shows the inmates and their guards drawn in a style reminiscent of Fisher Price Little People toys, their forms represented by circular heads and dots for eyes sitting atop simplistic shapes for bodies. To the uninitiated this may cause the game to look a bit too cartoony, which is until you make your way through the campaign’s storyline, which is peppered with cartoon panels presented as Polaroids, each panel illustrated like a gritty, violent graphic novel. These are really well presented, but at first seem to sit at odds with the rest of the presentation. If this does appeal to you, you will find a genuinely interesting crime family drama, complete with twists, turns and betrayals. It’s not necessarily a deal breaker, but it’s nice that Introversion decided to give what is essentially the tutorial some narrative context.

You can, if you wish, skip past the tutorial and jump straight into the sandbox, and your imagination is the limit. If you want a truly freeform experience, you can also opt to turn off events and turn on infinite funds just to see how crazy things get. Prisoners can also have gang affiliations, meaning that they’ll attack rival gang members, and legendary prisoners occasionally make appearances. These psychos fall into the ‘some men want to watch the world burn’ category and will easily make mincemeat of your security unless you take appropriate measures. The game constantly keeps you on your toes, and the outcome is always entertaining.

Add to this that the game supports Steam Workshop, allowing for near infinite user-created levels to be imported into the game. At the time of writing there are over 12,000 mods already available to download, and from the strong community surrounding the game, it looks like the game will be supported for a long time to come.

Additionally, Introversion have announced that the game will also feature an ‘Escape Mode’, which is the antithesis to the role of the prison architect: in this mode you will attempt to escape from a prison, even being able to form gangs and dig tunnels, which adds even more value to the overall package. This mode wasn’t able to be played at the time of writing, unfortunately.

The game is not without its problems: it can initially be messy to look at when your view is zoomed out and there’s a riot taking place, as it can be hard to track units at times. The AI pathfinding isn’t perfect as sometimes a guard riot squad can lose half their members when some of them decide to not follow the rest into a roomful of violent escapees, and on more than one occasion firefighters decided to wade into a blazing fire and perished ironically with firehoses in hand.

Introversion themselves have named Theme Hospital, Dungeon Keeper and Dwarf Fortress as the primary influences on the game, and it shows. There are times when the game is heavily reminiscent of the games made by Peter Molyneux’s Bullfrog Productions, albeit with a slightly darker, more adult tone. And as with any sandbox construction game, your enjoyment lies in direct correlation to how much you enjoy resource management and crisis control. If you’re a die-hard strategy fan looking for something different, or if you thought Theme Hospital was fun but lacked shivving and power drill-wielding inmates, then this game is definitely worth a look.

Dark, compelling and a different take on the sim/building theme

Can be hard to keep track of individuals. AI pathfinding isn’t perfect. 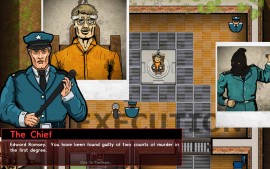 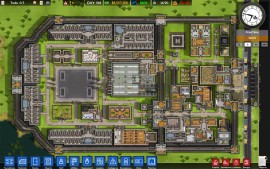 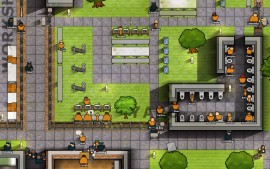 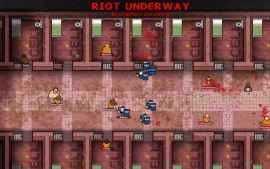 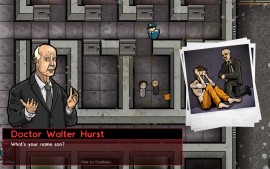 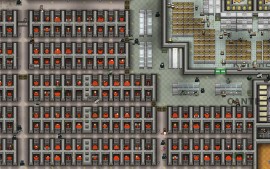 Totally Reliable to be Totally Delivered on Steam!