Every once in a while, game genres mesh in fascinating and interesting ways as game developers seek the next stage of making refreshing, interesting content. For PositronX, Scorpius Games makes use of rogue-lite elements in a very entertaining FPS package.

Gamers play as one of seven separate mechs, whose job is to traverse a facility and destroy enemy mechs in gratuitous, sci-fi heavy action as humanly (robotly?) possible. The mechanics in PositronX marry retro 90s shooters with the labyrinthian feel of classic rogue-lites, allowing for quick-paced action in every single combat room that the game has to offer.

Like many rogue-lites, PositronX makes use of randomized layouts on each delve into the game, aligning pre-configured rooms in multiple different ways. The vast majority of rooms in each area are considered to be ‘combat rooms’, which are filled with a certain amount of enemy robots that need to be defeated. They each have one boss room and one ‘shop’ type room, where gamers can make use of the scraps they acquire from defeating enemies to add to their battle capabilities or even purchase extra weapons or upgrades for said weapons. Said capabilities could be the chance to heal, to slow down time temporarily, to create a duplicate of yourself to distract enemies, and many others that can change how gamers play.

Weapons meanwhile have the classics, from pistols to shotguns, but there are also some interesting additions such as a flare gun that sticks to enemies and causes damage over time. Each weapon has two different types of fire, primary to the left mouse button, while secondary is to the right mouse button. This means that there is no button to aim down the sights of weapons and that accuracy in the high speed combat of PositronX can leave something to be desired, particularly with how ammo can at times be hard to find. While there are occasional drops found within the combat rooms themselves, most pickups will end up being found only when an enemy is defeated, so occasionally a foe will need to be defeated with melee attacks. Because of the need to get in close at times as well as aim properly, gamers are encouraged to stick to mid-range engagements, which provides an opportunity to hide from enemy fire or charge in to make use of melee. Due to this particular gameplay mechanic, this reviewer found the shotgun to be the most reliable weapon in the grouping of available firearms. The primary fire of this beloved boomstick is the classic scattershot, while the secondary fire actually feels a lot more like a semi-automatic rifle, where it fires one shot instead of a spread, giving an option to those who desire more precision within the realm of distance combat.

PositronX is a tough game, but this reviewer never found it to be unfair, every death was a chance to learn more about how best to take on foes or get a better look at certain enemy types, and gamers don’t start with nothing whenever they have to try again. When a player runs out of HP they get to pick from their unlocked robots to play as, each one having different starting weapons and skills that allow for alternative playstyles. The further gamers go, the more EXP that specific robot gets, allowing for them to be stronger on the next runthrough. This is a good way of encouraging gamers not to give up out of frustration, since, unlike many rogue-lites, this game allows players to grow rather than add to the potential items that they can find on runs, providing a refreshing change to the formula that is well known.

Unfortunately this game is not without its flaws. The controls can feel almost intentionally difficult and slippery at times, and the tight corridors can make avoiding enemy fire quite difficult in multiple of the randomly chosen rooms, particularly in comparison to some of the much more open areas that can be chosen from as well. This can be mitigated somewhat by making use of walls or pillars as cover, but on occasion it can almost feel intentionally cramped and awkward.

All in all PositronX is a delightful game about destroying killer robots as a killer robot in a constantly shifting labyrinth of high-tech labs, all while growing stronger and acquiring excessive weaponry. And really, what more could a gamer want? 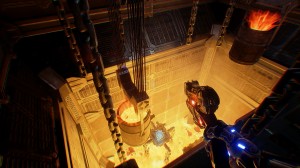 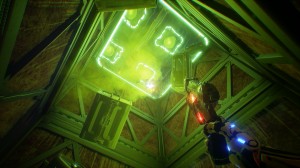 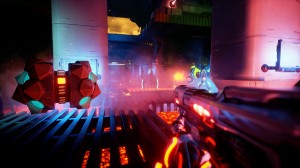 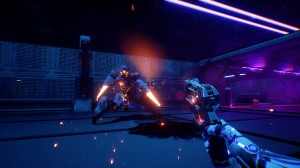