A spectre is haunting a house

Some of us are thrill-seekers; we love being scared. Nevertheless, horror isn’t for everyone – but what about instilling horror in others? What about playing the monster? Poltergeist: A Pixelated Horror looks to play off this particular experience. It may have highly-pixelated horror trappings, but the game’s tone seeks to capture bursts of frivolous fun – jumping out at friends or family from a cupboard door – as opposed to any proper sense of fear or horror. It’s a puzzle game where you play a ghostly presence in a big haunted house.

Things begin simply. You begin in the “Classic” era where our top-hat poltergeist-protagonist is most at home. After twenty or so puzzle levels, time will move on and the theme of the house and its occupants will change. There are three more historical periods to scare your way through: the 80’s, which comes full with cheesy, back-pack-strapped Ghostbusters, as well as the Modern and Office eras. Whilst the wallpaper differs between periods, each level looks and plays out in a similar fashion. Levels are made up of a number of rooms and in each there are a number of unwanted guests. Guests, both human and canine, have a number of lives attached to them that you must deplete in order to scare them from the house. There are a ton of levels, although none have much of a sense of character or physical place. Your ghastly domain seems to be a random assortment of bedrooms and kitchens, endlessly linked together in different, often illogical combinations, and eternally out of context.

Whilst there hasn’t been much aesthetic attention paid to the ghostly spaces of the house, the logic of Poltergeist is simple and quick to pick up. There are several abilities at your disposal, although primarily it involves the shaking of furniture and the throwing of objects from one room to the next. There are only so many objects in each room, and your abilities are always limited, so you must make use of the “call” ability to move guests around the house before carefully enacting your haunts.

There are several special characters in the game – witches and ghost hunters – that create spaces of immunity. A witch is immune to the shaking of furniture and will protect other guests who occupy the same room from that ability. Much of the game is about overcoming these immunities, controlling space and isolating guests, as well as making sure each move you make is as efficient as possible. As your abilities are limited to a certain number of uses, there is usually only one or two ways to complete a level. Rather than playful experimentation, often it’s a case of working out which guests needs to go where, and which abilities need to be used. It speaks less to the playful trickster, and more to the most abstract and regimented segments of the brain.

As the game progresses, more abilities – alongside their immunities – are introduced. Later on in the game you can possesses objects, summon dark presences, possess guests and send them from one room to the next, and even pull people into dark vortexes. Strategically, each ability only really differs in the amount of damage they inflict, depleting more lives and quickly shattering petrified minds. The major strategies once again revolve around the special characters and their immunities. The only reason to possess an object or summon a presence is to get around the particular puzzle; to work with what you’re given and to avoid specific immunities.

One of the few interactions in the house beyond your abilities are the distracted guests. Some guests will need to be scared numerous times in order for them to sit up from their slumber. This will free up the bed or chair they were using so you can throw it across the room and complete the puzzle in the right number of moves. Dogs also introduce a little complexity, as they are always the first to respond to the call ability, meaning they need to be dealt with quickly if you wish to move human guests instead. Special characters are also given priority when responding to calls. One of the games’ biggest frustrations is the lack of precision in the call ability; it’s often very difficult to know who will respond, and one slip up will mean you have to restart the level.

After working your way through a historical period’s puzzles, you’ll unlock three levels involving a boss character. These are Poltergeist’s most creative puzzles, as the boss character has a unique ability which makes things considerably more difficult. The Classic period has a moustached Houdini-like character who will teleport in a puff of smoke to the last room in which a haunt took place. This means you’re restricted to performing only one action in a room. The 80’s era sees you face off against a TV celebrity that sets up camera recorders in each room. Unfortunately, a very similar mechanic is also used for the boss at the end of the Modern era.

The many puzzles on offer in Poltergeist tend to look and feel similar to one another. And it’s a real pity scaring people isn’t, like in real life, fun. It might not be particularly free or playful in its approach, but there is a good deal of challenge here for those who enjoy the repetitive process of completing spatial puzzles. Completing every level can be frustrating, but the persistence needed and the pure brain-burning, logic-crunching process involved can occasionally be its own reward. Unfortunately, whilst horror often plays off our fears of things beyond human comprehension and rationality, Poltergeist seems to me to be all too logical of a puzzle. Instead of being mysterious and enigmatic, it’s more of a Rubik’s cube: spatial, memory-based, and unfortunately something I didn’t have the patience for.

Levels look like a random assortment of rooms and furniture, puzzles all have you doing very similar things, very little freedom or playfulness, playing the poltergeist here isn’t much fun 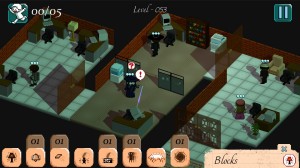 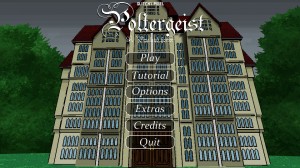 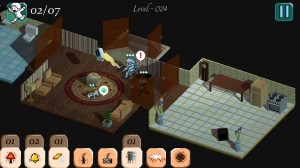 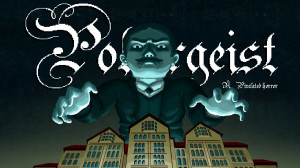