The Life Of A Beat Cop

Police Simulator: Patrol Officer is an early access game that allows the game player to become a police officer on patrol in a busy city environment. The game's developer Aesir Interactive and publisher Astragon Entertainment are well known for their simulations of what some might describe as being mundane jobs. However, doing a job like being a cop can be very interesting and in some cases very entertaining. There's no word yet on when the entire game will be ready for prime time, but we got the chance to test an early version of the game so that we could walk the beat and arrest some perps. The developers do seem to be releasing fixes and new features on a regular basis, though including the night shift update. This added a whole new element in to the equation of what this title will eventually become when complete. There's still more to come with Police Simulator, so stay tuned.

Like with most things in life, you don't start at the top. When first starting out in Police Simulator you start as a beat cop that is essentially a meter maid tasked with handing out tickets for various parking infractions. The city of Brighton which exists in the fictional state of Franklin, USA has to be one of the worst cities on the planet when it comes to it's citizens being able to park a car or to simply steer clear of the law. Even people walking the streets of Brighton are oblivious to the law and they drop trash right in plain view of cops. Then they go about their business like nothing happened while complaining about “how much the ticket will cost them” after you have handed them the ticket for littering. Jaywalking is cause for a ticket as well and even looking suspicious or guilty is cause for a frisking search and probably another ticket. Sometimes pot, drugs or a gun is found and then the handcuffs are slapped on and your cop has an arrest! So Brighton is essentially a lawless jurisdiction populated by people that don't seem to care about anything, which makes for a good gaming experience.

I Think I May Have Had One Too Many

There's car after car on the streets that are illegally parked, as well as drivers breaking numerous laws who all must be brought to justice. Note, you will need to be driving yourself in order to arrest someone that's breaking the law while driving. Cars might be parked on the curb, too close to a cross walk, too far in to the street or faced the wrong way. Drivers could have an engine that's too loud, their car is producing smoke, it has a broken tail light or it ran a red light among other violations. They all get tickets and if the car has an expired license plate or the driver seems agitated a quick DUI test and computer check could turn in to a drunk driving bust! In fact, there's a whole lot of drunks driving around at night in this city.

After your cop is qualified to investigate accidents, hunt down wanted felons along with many other police duties, you will come to see that the city of Brighton really is full of miscreants that go about breaking the law without even thinking about it. There's a lot more to being a cop in this lawless city than just checking expired parking meters. You need to let these people know that there's a new sheriff in town and you will be making criminals pay, including for the smallest offense. I gave out so many tickets on my first eight hour shift that I was surprised I didn't run out of tickets. Each shift lasts eight game hours (about twenty minutes real time) so you need to use your time wisely in order to clean up this town. Take note that the shift clock does not stop just because you are waiting around trying to figure out what to do next.

Rookie cops in Police Simulator start out with a gun, a stun gun, a police computer, a hat which can be worn or not, a patrol handbook, a map and of course a pen with an endless supply of tickets. As you work your way through each shift and perform properly you gain shift points (SP). SP can then be used to gain new equipment and open new patrol areas which come with more advanced missions and duties. The adverse of SP is conduct points or (CP). Each shift starts out with 100 CP. When a mistake is made, such as frisking a person or asking for ID when there's no cause, then the cop gets penalized by having CP subtracted. Even if the police officers themselves jaywalk they will lose CP. If CP is reduced to zero then the shift ends and restarting is necessary. Shooting someone will immediately end the day and so does running over a pedestrian with your police vehicle. However, there is the option to play in casual mode which takes CP out of the equation. This is when cops can go wild and cause more mischief than the criminals do.

My Promotion Came Through Today

No, the cop doesn't level up or get a new rank like in other games, but receiving a new rank would be nice as a future update. Maybe have the ultimate goal be to become a detective or police commissioner or something like that. As the game progresses and your officer gains experience, which translates in to more advanced duties, it becomes imperative that players follow proper procedure. It really is all about SP because the more arrests and tickets that are handed out the faster you can unlock new patrol zones, equipment and duties. Being on foot patrol handing out tickets to jaywalkers is nice for awhile and you could make a career out of it, but doing the same thing repeatedly becomes mundane. Walking a beat day after day is just plain old tiring and slow, so you will want to move away from those beginning duties quickly.

Advancement unlocks the hand held speed radar, a flashlight, camera, flares and other items while the a later advancement opens up usage of a police cruiser. Once qualified to drive the cruiser around town, that is when Police Simulator really becomes a load of fun. The car is a beast to drive and it's not difficult to literally smash and bash your way along while out driving on the streets in traffic. However, putting the flashing blue cop lights on and blasting the siren is what being a cop is really all about. It feels good when other cars on the road pull over to let you pass. You can either abide strictly by the law yourself or go totally off script and cause mayhem. The cruiser and all of the vehicles in the game get damaged when they hit something which makes driving around smashing in to things a lot of fun. Just don't hit a pedestrian though because the shift ends.

Police Simulator is still in early access, but don't let that scare you away as I have been having a heap of fun. The developers are doing a wonderful job of fixing issues and releasing updates. I hope they remedy the extremely loud vehicle engine noises that can be heard even while sitting in the police station! Other than that, things look real good in this game. Being a real police officer these days is not an easy job. In fact being a cop is an extremely dangerous and thankless job with demands to defund them being a popular thing to do these days. We support the men and women that put their lives on the line every day in the name of public safety. Police Simulation: Patrol Officer isn't just a game, its a simulation that accurately shows how demanding the job of police officer can be. The potential for this game in the future is endless. Support your local police department and this police game. 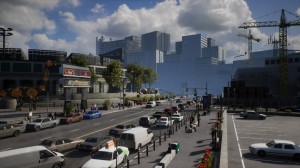 Storytime with Among Us creators Innersloth

Time for a Midnight Hunt with Magic: The Gathering

Heading back to Innistrad