Your planet is dying. In a desperate attempt to snatch survival from the jaws of extinction the Ato people, your people, have sent out groups of soldiers and scientists to the deep reaches of space to find anything that might help. Unfortunately for you, you’ve woken up at the totally-not-foreboding Planet Shadow, which is said to possess crystals and the mysterious Origin Stone that can bring prosperity back to the Ato and their homeworld. Even more unfortunately, Planet Shadow is filled to the brink will all sorts of incredibly nasty flora and fauna that want nothing more than to see you dead. So begins your journey to explore the planet, shoot everything that moves, and save everything you know.

Normally in these sort of bullet hell, run-and-gun games the player is sort of just thrown in with a few paltry sentences of story to justify it all, but I appreciate that not really being the case here. Don’t expect a terribly deep narrative or dramatic character development, but you do get justifications for what you’re doing. There are a number of NPCs with distinct, enjoyable personalities for you to interact with that’ll have you run missions, sell you stuff, or may even require rescuing from time to time. None of this backdrop really changes the core of how you’ll play the game, but it is a nice garnish did keep me more invested in what was going on.

Original Journey is a roguelike built on the skeleton of unlockables and progress, which I know sounds contradictory. Missions are carried out by selecting one of a number of environments that are unlocked throughout the game and making it through as many procedurally-generated screens as possible. Each screen, a floating island full of various nasties, must be cleared before the moving on to the next one. It’s this part of the game that functions like a rogue-like. While progressing through these levels your little soldier will pick up crystals (currency) and crafting materials, which grow in magnitude the further on a run he gets. Die, however, and everything you’ve earned on that run disappears. Health and ammunition don’t automatically regenerate between areas, so it creates an interesting dynamic between deciding when to press on to the next level, and when to “retreat” and head back to camp with everything you’ve earned.

As you fight deeper and reach new areas, you’re going to need some serious firepower, and it’s here that you’ll need that sweet, sweet loot from your “exploration” runs. By collecting supplies like radioactive material or monster eyeballs you’ll eventually get quite a few different tools at your disposal, but the core are your two guns and combat suit. Weapons are unlocked and function about how you’d expect, but the combat suits offer a little more room for variation. Not only does each function significantly different in terms of speed, health, and perks, but additional functionality can be embedded in the suits with one-time chips that let you customize how you play even more. Furthermore, suits can be upgraded with one-time upgrade chips that give various buffs. It’s a more involved system that I anticipated, and I had fun trying out different combinations to see what worked best for me.

Original Journey’s alien creatures and landscapes are brought to life in vivid detail by beautiful hand drawn visuals. The pencil and pen style art mostly manifests in green-tinted gray scale, accented by occasional highlights of bright red and green. Environments, characters, and monsters are all extremely detailed, and there’s always a ton going on on-screen. While beautiful, I will admit that it can become overwhelming at times. The game’s 2D, flat look can, from time to time make it difficult to tell what’s going on. When there are other allies in a fight the green marker for the player-character wasn’t always enough at quick glance to read what was happening. These are minor complaints in the grand scheme of things though, and they are sort of just the way this type of games go. I do think things might have been a bit easier to digest if the environments or characters had color, but I can respect the artistic choice of not doing so.

Original Journey has a lot of good going for it. You’ll meet characters you will like to talk to, see environments you will like to play through, and meet aliens you will like blowing up with all sorts of firepower. It doesn’t really re-invent the wheel, but it’s a great game to jump into for 20-30 minutes and revel in the cathartic bliss of blasting away some bad guys. As I type, I’m already looking forward to jumping back in and playing a bit more.

Screen can be hard to read when action gets heavy. 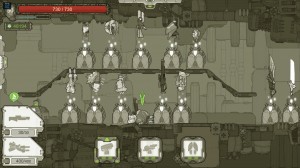 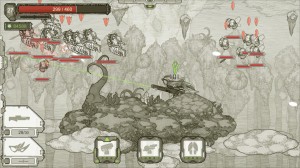 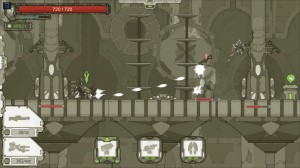 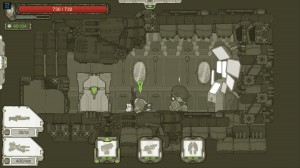 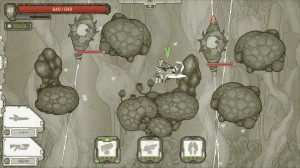 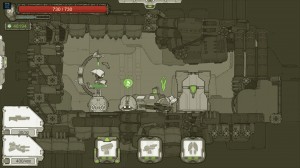