Two Stories In One

Lost in Harmony: The Musical Odyssey is a story-driven rhythm game with two different stories to play though. In Kaito's Adventure you play as Kaito who has a girlfriend he can hardly visit because of her serious health issues. Each night he dreams about traveling around the world and being with her. The other story is called M.I.R.A.I.'s Escape in which the player plays as an advanced AI on the run from those who wish to deactivate him. The two modes are mostly the same, each with moments where the player is trying to navigate safely on a track that shifts into a more traditional style rhythm game.

Other than the stories, the only difference between Kaito's Adventure and M.I.R.A.I.'s Escape are the soundtracks and a few minor mechanics. The music in Kaito's Adventure is a mix of original music and remixed classical music that ranges from pop to rock while M.I.R.A.I.'s Escape seemed to have more rock. The music in each changes multiple times in each level and it really keeps the pace interesting. Slower moments are a nice break from the amazingly fast moments the game can have and usually it's the best time to view some of the amazing artwork in the background. Most of the art is highly detailed and it's great eye candy to move through as you avoid obstacles as they appear to the beat of the music.

I say "most of the art" because there are some aspects, namely the characters in Kaito's Adventure, that don't cut it for me. They're done in anime style which isn't inherently bad but it just clashes with the rest of the art assets. The backgrounds feel like slightly cartoony paintings and the characters feel plopped in and do not really fit in stylistically. Moreover, I wish Kaito's way of moving through his dreams was a bit more inspired than just he and his girlfriend on a skateboard. Overall, Kaito's physical character feels a too apathetic to his girlfriend's situation despite showing more emotion in his communication with her. M.I.R.A.I.'s character, however, fits perfectly within the rest of the art in his story, perhaps because he's a robot and I don't expect him to emote or even have a specific look in the first place.

Can You Feel The Beat?

Method of transport aside, both Kaito and M.I.R.A.I's movement through their worlds are set amazingly well to the ever changing music. Obstacles swoop in from the sides to loud orchestral crashes, oncoming objects reach you just as you feel the beat of the music telling you to jump, extra point paths have you weave in and out of danger, and it all feels spot on. Both modes keep you on your toes even when the more typical rhythm moments of the game stop. Each new type of obstacle is clearly introduced and then used in interesting ways in each new level and it always keeps things fresh.

The rhythm game aspects start randomly in each stage, usually during some very fast paced music. It took me a few times to catch the tells for when the game was switching from avoiding obstacles to the typical style of rhythm gameplay, but eventually I was desperately button mashing and hoping to get some points... like a pro! Yeah, I suck at rhythm games, so I really enjoyed avoiding obstacles to the beat more. I wish there was an easy mode but that's just personal preference because even I, with just some minor difficulty, could get by on normal mode, just barely. The timing for each button press feels perfect too, I just personally find it difficult to right myself after confusing a button and falling out of the swing of things.

Fun Even For the Rhythmically Impaired!

Despite the fact that some art doesn't mesh well, Lost in Harmony: The Musical Odyssey is a beautiful rhythmic adventure that even a rhythm game amateur like myself can enjoy. Both story modes have a short yet satisfying plot with exciting music that really keeps the pace right where it should be. It's a game that was off of my radar initially, but I'm glad to have had the chance to jam out with Kaito and M.I.R.A.I. 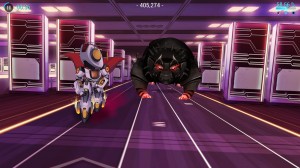 Returning for its fourth year

Life in the Zone