Every now and then I’ll sit down to watch a nature documentary, most often because one of my offspring has an assignment to do at school. And, as is often the case, parents end up learning about the subject matter themselves. Recently, I was forced… err, volunteered… to watch a documentary about the orangutans of Borneo and their plight. There was one particular scene of footage showing how gracefully the orangutans swung through the trees with their long, red fur-covered limbs that had me mesmerized. Heave Ho has players moving their character from one platform to an end-zone in a similar fashion. Our orangutan-like characters (albeit without legs) must grapple and swing their way from their starting location to the chequered flag cup-shaped platform that marks the finish of each level.

The control scheme is somewhat reminiscent of Grow Home, whereby you control each of the two hands separately. Grow Home was a 3D environment, whereas Heave Ho is a 2D platformer, but that individual control of separate limbs works in a similar fashion. With the controller triggers each working the left and right hands of the characters, and the thumbstick providing the movement, the controls are rather intuitive. However, depending on which way your character is orientated, it can get confusing working out which hand is being used to hold onto a ledge.

As would be expected, the levels start out extremely easy requiring our hanging characters to navigate across basic platforms. But as you build up you skills and familiarity with the controls, the game slowly works new hazards into the levels. Large gaps that require swinging and throwing yourself across, spikes, massive boulders akin to the one from Indiana Jones, and complete darkness are just some of the multitude of dangers that you must overcome. The movements seem to be primarily physics based, with swinging on ropes and the throwing of objects reasonably realistic. Lifting up heavier objects (such as giant eggs) takes more effort than the collectible tokens. If the game thinks that you’re taking too long to pass a level, a help function can be activated to speed you through to the chequered flag.

Despite the introduction of new environmental dangers to the levels, the game can feel somewhat repetitive: you grapple, swing and heave yourself to the end-goal. This changes, though, when playing with a friend (or friends) in local multiplayer, as you’re working together to move your way to the finishing line. This co-op nature makes the game simpler, as you can group together like a daisy chain in order to bridge gaps, but at the same time adds the challenge of not being in full control and having to rely on your partners' skills as well as your own. Most of the levels are the same (or very similar) to the single player levels, but often have been changed enough so that they require the co-ordination of two (or more) players.

Falling to your death or hitting any of the hazards causes your character to respawn. Unfortunately, dying at the wrong point can be rather annoying. Upon respawning, your avatar drops from the closest spawn point, but this could mean that the legless character simply falls to another death if you can’t latch onto something on the way down. Given that you can die as much as you want, it doesn’t really matter, but it can be frustrating.

As well as reaching the end-zone, each level has a token that can be collected. These tokens can be spent in the in-game vending machine. The vending machine unlocks prizes that allow gamers to customise their avatars. These costumes have no bearing on the game, so if you’re dressed as an astronaut, you won’t be able to float around the levels any easier.

You could say that Heave Ho is somewhat visually unappealing, as the scenery and characters have a grainy 1920’s style cinematic look to them (albeit in colour). But this is clearly as intended and works well within the humorous nature of the game. There are birds that fly past and cover you in poop if you’re taking too long, and a llama that walks past and farts, filling the area with a dark fog. Even when players fall to their deaths, an explosion of paint covers their comrades. Heave Ho is a game that doesn’t take itself seriously, and should be played as such, particularly with a group of friends.

Co-op mode is a heap of fun, full of humour

Some re-spawn points are placed in difficult to continue locations 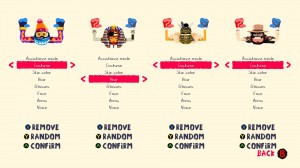 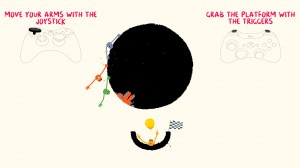 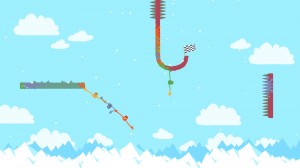 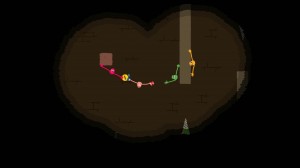 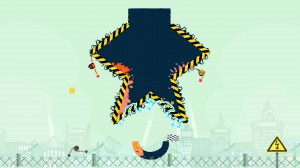 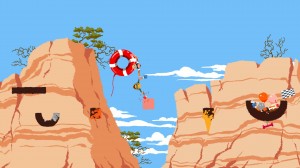 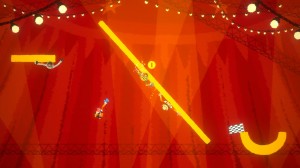