What do you do when you want to make a game but are not an artist or a programmer, but a pretty good storyteller? You license an easy-to-use game engine, get all your visuals from classical artwork, your music from public-domain recordings, and set about creating your masterpiece. Four Last Things is a game by Joe Richardson and while it’s an entertaining, silly little game, it feels unfinished. If one takes a look at the game’s Kickstarter page, the reason why is obvious.

While the title makes use of renaissance-era artwork, the collage of paintings by various artists makes for a surprisingly unified game world. One feels as though one is playing through an interactive painting from the period, albeit one that doesn’t take itself seriously in the slightest. The ambient music adds to this effect by not only featuring classical compositions, but public-domain recordings of them, adding a matured sound that fits the aesthetics perfectly.

The game is as simple as they get. Auto-save whenever you progress in the story does away with saving and loading and the game automatically detects and adjusts to your screen, so there’s no need for a “settings” menu item. Neither is there for controls, as left clicking brings up the classic Examine/Talk/Use menu and right clicking does a backflip, for some reason. Your inventory only has eight slots, and combining items is not an option as far as I can tell. In fact, the main menu only has four options: Continue, new game, credits, and exit. This is as simple as it gets and allows you to get straight into the game.

You start the game as Adam in the Garden of Eden. Eve is trying to convince you to eat one of the apples from the tree of knowledge, while God is urging you not to. Try as you may to resist, there is no way to advance in the game but to pluck an apple from the tree. As soon as you do, the protagonist of the game wakes up and wrought with guilt, he sprints to the nearest church to confess his sins. He has committed each of the seven deadlies and feels that confession is the only redemption available to him. When he gets to the church, however, he is informed that he cannot confess to sins committed outside of the parish. There is, however, a loophole. If you were to commit each of the sins within the parish, the church can absolve you of that sin and with it, any previous instances of that sin. That is to say: commit an act of lust within the parish and confess to it, and all your past lustful acts will be forgiven. Off you go on a mission from the church to commit every sin in the book.

The game banks heavily on a sense of humour reminiscent of Monty Python. Fitting, considering the art-style which is like a prolonged Terry Gilliam cutscene. The game does a fair amount of fourth-wall breaking and self-referential jokes which sometimes seem excessive. I enjoy that kind of joke every once in a game, but when it’s done too often, it becomes difficult to sink into the gameworld and immersion is rendered impossible. Unfortunately, that proved to be the case with my first hour of gameplay, but as I progressed, the world became more and more gripping.

Despite what the Kickstarter campaign page promises, there is no voice-acting in this game. This makes the game feel unfinished, but to be honest, it didn’t bother me until I visited the Kickstarter page and saw that it had originally been planned. Perhaps that is the only reason I notice its absence at all, but now that I do, the experience is lacking.

Four Last Things is a short, silly, entertaining point-and-click adventure game that pays homage to the genre’s late 80’s roots with a sprinkle of that decade’s funnybone-dust, all wrapped up in a renaissance aesthetic style that makes the experience unique. If you can look past the miniscule production values, and if you’re a big enough Pythonian a heart, you’ll sink right into Four Last Things. 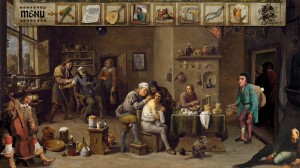 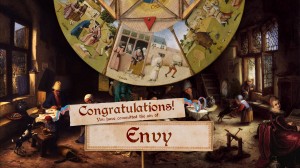 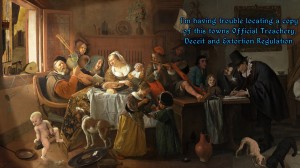 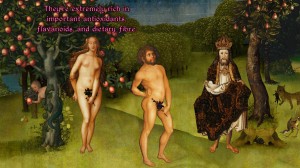 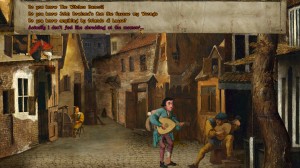