Fire is a cartoon point and click adventure game set in prehistoric times. You follow Ugh/Ungh/Urh, a plucky young Neanderthal, named after a grunt, with a point to prove. Exiled from his Stone Age village for sleeping on the job and letting the sacred fire burn out, the lazy burn-out must in turn travel wild lands, reach the great volcano and bring fire back to his people. It’s an epic quest – although one punctuated at every point by an overwhelming sense of humour.

Puzzle-wise, Fire is pretty stripped back. There are ten areas to solve your way through – each made up of several, beautifully drawn, 2D panels. There are only so many objects you can click on and interact with. The spacebar makes this apparent, keeping puzzle progression smooth and simple. Other than solving the area and moving on, there are golden orbs hidden off the beaten path.

How many cavemen does it take to change a light bulb?

There’s a lot of quirky humour in Fire – think of the Flintstones, although less domestic and without all the talking. True to reality the Neanderthals here are primitive communicators. What little human to human interactions there are play out via grunts and hand gestures. The only distinguishable conversation to take place is played for laughs and, true to form, Ungh quickly nods off.

Each of the ten areas is varied but revolves around some kind of wacky gimmick. The first area has you operating the insides of a sleeping dragon, blocking his nostrils in order to divert his snoring and blow a magic orb into the arms of Ungh. There is a level set on the moon where you avoid floating vortexes with gushes of your jetpack and then play an Asteroids mini-game. The most memorable set revolved around a great obsidian obelisk – like the one from 2001 – and a group of banana-craving monkeys. Admittedly, I’m a bit of a stoic, and a lot of Fire’s quirkiness drew a blank, but dancing monkeys will draw smiles from the steeliest hearts. Fire is positively bonkers.

The best element that is not fire

Fast-firing with its gags and parodies, the Space Odyssey obelisk turns out to be a giant smartphone. Before the level is complete you will need to tackle pop-up spam, email your mother and complete a micro-transaction heavy mini game (boo!). The gags don’t last long and for every one that falls flat there will be another with the potential to elicit a chuckle. Fire seems well suited for children – or at least it’s one you might play with a child in tow. It is light, and despite the Stone Age veneer, pretty modern too. There’s musical jingles, time machines, an assortment of strange creatures with funny faces and even butt-plugs… hold on a minute! There’s a gag that involves sticking a cork in a monster’s anus. I’m not entirely sure Fire is child-proof, but it is an odd one-off, and who knows – I’ve not watched CBBC in a good while, this may well be part and parcel of growing up in the 21st century.

Fire is a wild journey packed to the brim with colour and good-intentioned humour. Most of the puzzles you can solve on auto-pilot, so by no means is it a long or arduous adventure. Fire may be best summed up as an extension of one of its own jokes: at one point you are given six arbitrary items and asked to come up with a solution. Within a few seconds you have dragged and dropped them in combination, resulting in something that works but is completely silly. The constant barrage of random occurrences and the playful ridiculousness that comes as a result is Fire’s best element. Just don’t expect the invention of the wheel.

Quite a few bad jokes, can auto pilot most of the puzzles. 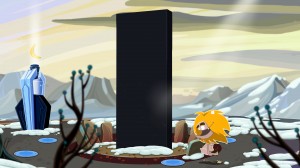 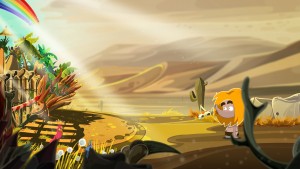 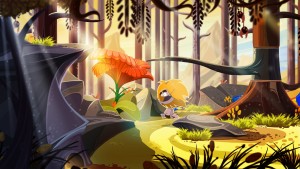 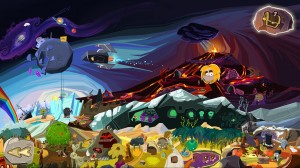 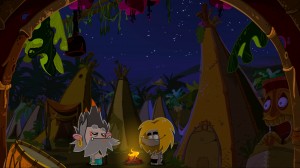 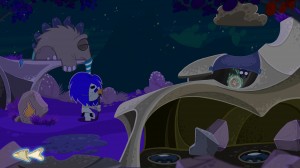