A feeling of familiarity

As I mentioned in last year's installment of the FIFA series, I'm not normally one for updating sports titles each year. Despite the all-important roster changes, there is normally little else that gets improved upon. Unfortunately, that is much the case with FIFA 15. Don't get me wrong, the game is easily the best soccer/football title on the PC at present and does just about everything right, but is it worth upgrading from FIFA 14? Probably not. If you're getting into the FIFA series for the first time or have been away from it for a period of time, however, FIFA 15, the first in the franchise featuring the Ignite Engine on the PC, and it's well worth looking into.

He shoots, he scores. Well, that appears to be the focus in FIFA 15. Plenty of effort has been taken in ensuring that the passing and shooting mechanics work and they do so extremely well, enabling you to twist and turn around opponents. At times, you'll even manage to waltz (not literally, but almost) into the opposition goal. The attacking controls are smooth and responsive.

Unfortunately, this doesn't seem to have been transferred across to the defenders. Yes, they move smoothly enough, but getting in that ball-stripping tackle or slide can be tough. Especially when the game automatically switches to the closest defender when often it feels that another player was in a better position to chase down an opponent. The momentary switch between players is often enough for an attacker to work his way through the defence. Maybe it's just the improved attacking and dribbling mechanics that make the defenders seem somewhat inept, but I had the same issue with FIFA 14 and it appears as though the team at EA Sports needs to put a little more effort into the defensive mindset.

Presentation-wise, FIFA 15 is an improvement (although ever so slightly) on the previous version. The matches continue to feel like fully televised events. Commentary from the evergreen Martin Tyler and Alan Smith remains of the utmost quality. It certainly takes a number of matches before the commentary begins to repeat itself, and since the same two commentators were used in FIFA 14, there has definitely been some re-use of their previous quips. Nonetheless, their banter is great, it sounds professional, and if you haven't played for a couple of years, the repetition would not even be an issue.

The visual spectacle is also first rate, with replays of goals, close attempts, and other highlights played at appropriate moments. Watching the cut-scene replay of a superbly timed volleyed shot hit the back of the net is as cool as ever, as are the player-controlled post goal celebrations. EA Sports have even included new animations of players dropping to their knees in disappointment or angrily yelling at themselves for missing a relatively simple shot (although they don't seem to be mouthing swear words like in real life). It does make the game feel more realistic and gives the players a sense of personality, rather than being mindless drones. Apart from those new animations, however, there doesn't seem to be too much difference in the visual style from last year's edition - not that there was anything wrong with that.

Defending controls are still an issue 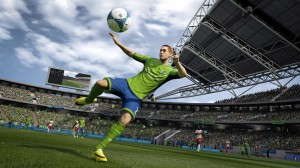 A solid sequel that lets you (and your friends) be as baaaaad as you want.

The Dark Pictures Anthology: The Devil in Me

Hollywood horror, warts and all

An update to a galaxy far, far away.