Dirty Bomb is a faced paced team-focussed multiplayer shooter set in London in 2020 after a mysterious disaster has struck, leaving the city abandoned. Two competing Private Military Companies have taken over in order to control what valuables are left in the city. Of course, you and your teammates form one of these military companies, as you take on the competing force.

Dirty Bomb currently ships with thirteen mercenaries (Mercs) to choose from - enough that there is a character and loadout set for every gamer type, whether you're a sniper or that bullet absorbing beast. Characters range from medics, to assault class to snipers. And although the characters can be classed into specific classes, their loadouts (primary and secondary weapons, melee weapon and special abilities) can be altered slightly to create somewhat of a sub-class. Unfortunately, these loadout options only become available once a special Equipment Case is earned. The case can then be opened to reveal the specific loadout for a particular character, which can then be used as part of your squad. In each match, gamers get to choose three of the Mercs to make up their own mini squad, although only one can be used at any one time. Once your chosen character suffers a death, gamers can then decide to switch to a different Merc that they feel may better suit the particular battlefield or team formation.

Dirty Bomb currently has two fully functioning game modes, although I know there has been some testing on a third (known as Executive). Objective is probably the favoured mode, requiring teams to complete a number of objectives in order to win the round. Attacking teams may have to destroy a number of locations or repair and escort a vehicle to a particular destination, whilst defending teams will be preventing the attackers from doing so. Stopwatch mode is similar, but instead requires teams to complete the missions in the quickest time. Each team gets a round to play as defenders and attackers, and the team that completes the objectives in the fastest time wins.

There are currently five maps in which to run and gun, with more on the way. Each are reasonably sized and are quite varied. Underground has you running around a tight indoor complex, whilst Trainyard has gamers facing off in a larger open area. Then there is the streetscape in Bridge, which is an outdoor area with some narrow choke points. These bottlenecks invariably occur on the Repair and Escort the EV to Point A objective maps, with players attempting to repair a damaged EV often getting shot down mid-repair. It can be frustrating at times.

Working as a team

But, there is a huge emphasis on teamwork in Dirty Bomb, and it certainly helps if your squad is not made up of all the same class. Ammunition is not unlimited, so often, you'll be relying on Skyhammer, Kira or Arty to provide you with ammo once you run out. There are a number of ammunition stations located around the maps, but these can often be difficult to get to, especially if the enemy has them locked down. Health is also important too, and if you do get hit, moving away from the action allows you character to regain strength. Alternatively, Aura, Sparks or Sawbonez can provide medpacks or deploy health stations for teammates to heal.

Plenty of characters to choose from. Emphasis on teamwork.

Still some balancing issues. Not as fun when teams don't work together. 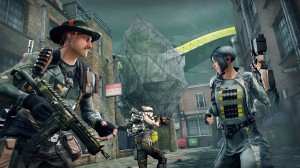 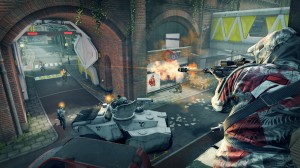 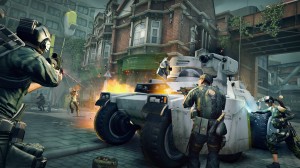 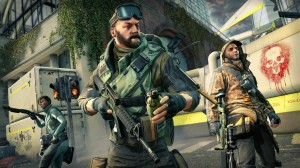 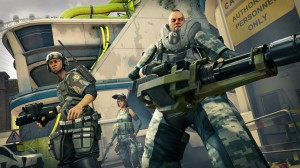 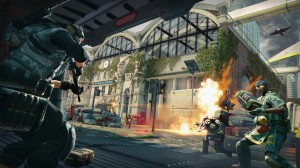