With Dandara, I didn't know quite what I was getting myself into. I saw what, at first glance, appeared to be a platforming title with an emphasis on the defiance of the laws of physics in more ways than one. Brightly colored and playful, it looked as though its main goal was just going to be a quick moving adventure. I can admit when I'm wrong, and I made a huge mistake. Dandara defies the expectations a first glance gives.

Welcome to the world of Salt: a former utopia inverted by an oppressive and iron fisted enemy that turned the once beautiful landscapes in on itself, shattering reality and the hope, will and dreams of many of its inhabitants. In the darkest hours of Salt, a hero will rise. Dandara, a shining beacon of hope to the people and a very clear and present danger to the would-be-oppressors.

The overall narrative is a pretty hit and miss one, but when it hits it hits hard. There's moments where Dandara gets a little 'real' and while it may be a jarring departure from the game you're playing, it handles the message relatively well without doing it in a way that would alienate people who just want to play a game. It's serviceable, it drives home the points the developer wishes to make, and despite the misses at times it mostly works.

But it's more the misses in the gameplay that concern me rather than those that exist in the narrative. Presented as a platformer, Dandara is actually built with touchscreens in mind above anything else. Movement is done in a point-and-click manner with a mouse and keyboard as you jump from ceiling to floor and even to walls as quickly as you can. So while it's technically a platformer, approaching it in this manner feels more like a puzzle game with combat involved.

The combat is simplistic, but given that it was made with touchscreen controls in mind it is to be expected. It handles well, and coupled with the way you move your character it's actually pretty entertaining for a bit at least. But, in the end, I just can't help but feel that designing the game in this way was a miss. If you're not playing on a touchscreen you can definitely feel the game isn't playing how it's supposed to. It feels clunky with a keyboard and mouse, and while it improves vastly on a gamepad it is not perfect. If you're an absolute fan of touchscreen-based games then this one could be top notch. However, if you're like most PC gamers you're not going to exactly praise this design choice.

Visually, however, Dandara is a treat. Beautiful pixel art is visible throughout from the characters on screen, to the creative world of Salt you'll explore. Through various twists and turns, as the perspective changes every so often depending on the sort of obstacles you're overcoming, it all seems so well put together visually that I can't find something that rubbed me the wrong way. Enemies have creative designs and odd locales really pop out of the screen with the Metroidvania look (even if the gameplay lacks the feel) and the boss designs are downright creepy at times. Accompanying the visuals is a rather enchanting audio platter of very fitting tracks tailored expertly to the various feels of Salt. I think it's easy for me to say that most of my praise for Dandara goes right to the art direction and audio expertise.

Dandara isn't a bad game, it's just perhaps not the game for me or for many others. The control choice has made it very niche, and while it's likely to perform much better on the Nintendo Switch, it just feels like it doesn't quite have a home here on the PC. If you're willing to take the leap, you'll be greeted with beautiful pixel art visuals and candy for your eardrums - and that's fantastic. But, it comes at the expense of having to wade through gameplay that never really feels like it fits if you use a keyboard and mouse, and that only improves slightly if you use a gamepad. This game was meant for touchscreen, and most PC gamers don't utilize touch screen controls as there has never been a major reason to do so, and that remains unchanged even after Dandara's arrival.

Beautiful use of pixel art, creative design choices for characters and levels, catchy sound, storyline conveys a strong message at times without detracting from the game. 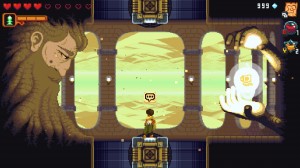 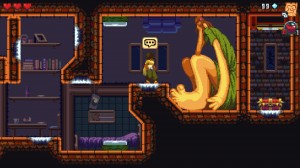 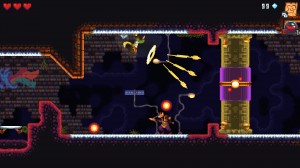