Move it to the rhythm

So, I may as well admit that I have an unnatural love for rhythm games before I even begin this review. I should also be honest and tell you that Iíve been waiting for an indie developer to come up with an ingenious and intuitive new rhythm game for a long time now. Finally, after years of disappointment, Crypt of the NecroDancer has arrived. Now donít get me wrong, this is no party friendly, Rockband style rhythm game. You will die. You will die, a lot.

The roguelike genre is well known for its unforgiving nature and it is chugging along full steam in Crypt of the NecroDancer. The aim is essentially to work your way through various dungeons or ëcryptsí which get progressively more challenging and throw more and more interesting monsters in your way. To do this you can only move from tile to tile on the beat, building a score multiplier as you successfully time your movements. The majority of your enemies are restricted to the same ëbeat-basedí movement, and follow set paths that you are best off learning in order to time your attacks to more effect. During dungeon crawling you earn coins that can be spent on upgrades at stores found in the dungeons themselves and you can find diamonds to be spent on more powerful upgrades outside of the dungeons. As you progress further in the game you unlock other playable characters who have their own movement abilities and serve to vary up the gameplay options somewhat.

What this game is really about though, is the music. There is nothing quite like the feeling of a strong run as you perfectly time the slaying of another skeleton and the music kicks in to full effect. That music, that builds and builds with every move and every swing of the sword is pulsating and superbly catchy. It is really thanks to the fantastic soundtrack that this game does not become frustrating very quickly. The majority of other dungeon crawlers and roguelikes I have played have a tendency to put me off after the hundredth or so permanent fatality. Games like FTL and Sunless Sea are games I adore but I always reach a point where it all becomes just a little too much. Crypt of the NecroDancer is a game that could so easily fall into that trope, but I am constantly drawn on towards discovering yet another epic tune.

To be fair to this though, there is more than that here urging you to keep trying again and again. Some other permadeath games like the ones mentioned earlier can occasionally make you feel like there was literally nothing you could have done to avoid your fate. Crypt of the NecroDancer certainly does up the ante a little here and there, but it always leaves you feeling like you could have done better. There is only one mechanic at play here that results in essentially every death I have suffered here and that is having to move on the beat. It throws an insane amount of pressure onto you, urging you forwards a beat at a time. Take away the pulsing beat and it would be so simple, just sit back, take your time, study the landscape ahead of you and make your way through one tile at a time. But when you have to move with every second gameplay becomes frantic and mistakes are there to be made, oh so many stupid mistakes.

Dying to the beat

Now itís not necessarily true to call death in Crypt of the NecroDancer truly permanent. The diamonds you find during your escapades, which can be spent in the lobby between games, provide you with upgrades that do carry over as you keep playing. These may be small upgrades like an extra heart or placing an extra treasure chest in a dungeon, but over time they make enough of a difference to feel worthwhile. Replayability is also a strong point, which could probably be said for most roguelikes but feels a little more hard earned here. Obviously repeatedly dying and having to start the game over again means a player could keep playing a game for all eternity. But Crypt of the NecroDancer is so reliant on and carried by its music that if it didn't have a solid and hefty amount of soundtrack available it would soon fall short and leave players wanting far more. Thankfully, with the selection of characters to choose from and what really does amount to a huge and varied soundtrack, players really do have plenty of reasons to keep playing.

To be fair to it, Crypt of the NecroDancer isn't a game that just has to rely on that level of depth. The core gameplay is so deliciously challenging to a point that doesn't feel too harsh that I found it hard to rage quit when failure really was on me. This is a game that appeals to all gamers, not just fans of rhythm games, but itís a damn good rhythm game regardless. I expect to be dying to the beat for a long time to come.

Alright, so maybe dying does get annoying sometimesÖ 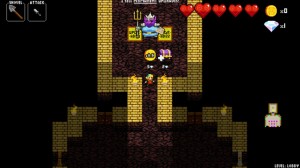 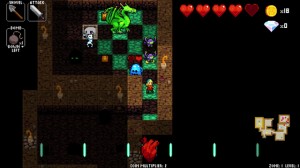