Crusader Kings II is now on to its fifth expansion since its release in early 2012. This time we have Sons of Abraham, which provides some additions relating to the Abrahamic religions of Christianity and Islam, and introduces Judaism to the game. You’ll see the Knights Templar being formed, Papal orders being enacted, and holy wars raging across the land.

If you don’t know what Crusader Kings is all about, let me give you a brief run down. I like to think of it as the Minecraft of grand strategy. There are no tangible goals, you just kind of do what you want. You choose the year, where you want to start and who you want to play as, and from there you forge your own path through history. You might play as a King, or even as a simple Earl or a Duke. You could make it your ambition to accrue a ton of wealth, or to invade other territories, or simply just to continue your bloodline as long as possible.

Medieval times were treacherous and bloody though, so you can bet that it won’t be easy to live a simple life. It turned out there was a lot of inter-family fighting in Scotland, where I chose to start one game. My spymaster informed me of a plot to kill me, started by none other than my own son. I had him thrown in prison, of course, but as my only heir it raised a tricky situation when I died a couple of years later. In Crusader Kings, as long as you have an heir and some territory you can keep playing. So from that point I was playing as a treacherous king who also happened to be rotting in jail. Needless to say, my lands didn’t stay mine for very long, and I was greeted with a game over screen soon after.

The very fact that this sort of crazy thing can happen is what makes Crusader Kings so cool to play. The amount of depth is staggering, to the point that I had to replay the tutorial in its entirety, despite it only having been a year since I last played the game. Poor translation from the native Swedish and misinformation don’t help beginners. In one tutorial step I was supposed to arrange a marriage for myself. Except I already had a wife. Maybe it was foreshadowing a future plot to kill my own spouse – which is certainly possible within the bounds of the game - but I doubt it. Nothing stopped me from being able to progress, but being confused in the tutorial of a game as intricate as this doesn’t bode well.

Dealing with the Pope just adds a new layer of complexity. Soon after election, a new Pope had an issue with one of my laws. To keep him, and a number of my subjects, happy I had to change it. It’s important to keep the bishops beneath you happy: if they like the Pope more than you, all of your precious tax money will be shipped off to Rome. Annoy the church too much and you’ll be excommunicated, giving you a bad name across the entirety of the Christian world. You could always set up an anti-pope however, someone making a legitimate competing claim to the Papacy, but under your control.

At first I thought all the obscure mechanics and complexity meant I wasn’t having a good time, but then I checked the time. It’s easy to just let the game run and see what it throws at you, and hours later you emerge, still thinking about secret plots and county taxation. One of my plots was to kill a princess of the Holy Roman Empire to further my nefarious desires. I had gathered support, and the plans were being laid out. But one of my co-conspirators got drunk and spouted all the details in a crowded tavern. Word got out, and the plot failed, and of course the princess wasn’t best pleased with me. Be careful who you trust.

Crusader Kings II is definitely the deepest, and hardest to understand of all the games of its type, but there’s nothing else out there quite like it. The additions brought to the game by Sons of Abraham are plentiful, and probably stretch further than I encountered. It’s a good reason to jump back into the game if you enjoyed the original or any of the prior expansions. For new players though, it’s just as daunting as ever.

Some intriguing additions to an already wonderfully deep game.

Some translation errors and a handful of technical errors. Still very hard to get into for a beginner. 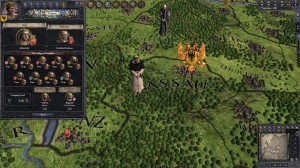