Get in, blow it up, get out

No matter which way you look at it, weaponised vehicles are cool. Whether they’re tanks with big cannons, walking mechs with machine guns, or hovering speedsters with lasers - if one rolls up on you, you’re going to have a bad time. In Brigador, you’ll find all this and much more, and you’ll be using them to cause as much destruction as possible while completing your mission objectives.

The basic structure of Brigador is this: In a story mission, you have select targets which you have to destroy to complete the mission. There are side objectives which involve destroying secondary targets, and these will grant you more money, but aren’t integral to your success. Once you’ve destroyed your targets, you make a dash for the exit and reap the rewards.

It sounds simple, and knowing you’re piloting a death machine makes it sound like it would be easy, but it most certainly isn’t. You’ll be coming up against stiff opposition in every level, and your enemies will have their own mechs and tanks. Brigador is tough, and you can die very quickly if you get into a sticky situation. Indeed, it’s entirely likely you’ll explode into tiny bits and pieces in the tutorial levels if you’re not paying enough attention. Mech games are usually about you trouncing your enemies and causing massive destruction while being pretty much impervious to damage. Here though, tactics are key.

Whichever vehicle you choose, you’ll have two weapons available, bound to left and right click. Usually they will be a slow-firing heavy weapon and a lighter, quick firing weapon, but there are almost endless possibilities. You’ll also have a special ability bound to the middle mouse button, which will help out with your survivability. It might be deployable smoke, a cloaking device, or a devastating EMP. Then, depending on the type of vehicle you’re using, you’ll either have a stomp attack, or a speed boost. Holding down shift will mean you sit stationary, but you’ll receive a defense boost while you do. Using all the tools at your disposal is the only way to ensure victory, especially as one wrong move will take you to the game over screen.

Destroying certain types of enemies and hoovering up their remains will give you back some of the shields you may have lost, but in the heat of battle, your tank won’t last long. Levels in Brigador are very much you against the world, and if there are too many enemies on screen, it’s pretty much a foregone conclusion that you’ll be a smoking wreck within seconds. So, you have to think about things more strategically. The two camera modes available either lock the camera to your vehicle, or you can toggle a mode which lets you pan outwards a small distance from your current position. This is useful for scouting out what’s ahead and for shooting long distance, but when the action gets heavy, you’ll need to switch back to locked camera mode to make sure things don’t get confusing.

But things might get confusing anyway, as the UI isn’t much help. The way your vehicle is facing is indicated by a tiny arrow, which often gets lost in the background, especially when there are explosions going off all around. This arrow is what you need to make sure you’re going in the right direction. You want to drive around a corner, not into a wall, if you’re looking to escape a bunch of tanks bearing down on you. It’s also tough to see what your health and ammo levels are like in the heat of battle, as they’re hidden away in the top corner of the screen. If you’re about to take critical damage, the screen becomes dark, but if you’re taking a lot of damage, it’s unlikely you’ll survive anyway.

Otherwise, Brigador looks great. Screenshots make it look like this is a simple retro style, however when it’s in motion, it’s anything but. Watching a building explode and set off a chain reaction that spreads across the entire screen is always a gleeful moment, and the city of Solo Nobre is a sprawling industrial, yet neon-bathed metropolis. The soundtrack has a driving 80s-theme too, and a version of the game comes with both that and an audiobook which expands the story. However the story on its own is pretty dreary and boring, and takes second place to the intense action.

Tanks for the memories

There’s usually a standout moment in every mission, which comes about more by the way you play rather than any big set piece or narrative beat. One mission that sticks in my memory was where I was controlling a tiny walking mech and was tasked with taking out four priority targets. My little vehicle, despite having some powerful armaments, was never going to stand up in an extended fire-fight, so I used the cloaking device to my advantage. Ducking in and out of cover and briefly becoming invisible, taking long range shots and then darting away again, this was a tense affair you don’t normally find in a game of this type. All tactics went out the window as I made a mad dash for the exit, barely escaping with my life.

It’s moments like these that make Brigador worth a look, but beware, as you will find just as many frustrating moments. Suddenly dying after nearly completing all your objectives, or not realising your gun hasn’t been firing for the past 20 seconds because you’ve run out of ammo are instances which will rear their ugly head more than once. Brigador does a lot of things right, but there are a handful of things which prevent it from being great. 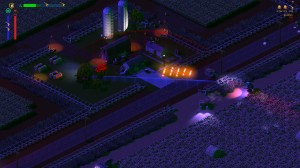