When I first saw Bounty Train demoed back in 2015, it was not quite what I had expected. Roughly speaking, train games come as hardcore simulations of driving a train or as economic simulations. There is a hint of the latter in Bounty Train but only a thin sliver of it. Of the former, there is no trace at all. In truth, having finished the game I’m still not sure on how to label it.

Perhaps the backstory is the best way to start describing it. Your father has died and left you a small amount of shares in the railway company that was his life’s work. The rest of the shares have scattered into the four winds and it is your job to gather a 51% stake before your father’s nefarious business partner can. Fail and the next big railway project runs through in Native Indian lands, succeed and you restore the company to its former glory and preserve peace with the Indians.

The cost of battle

The mission is a tall order for someone who has not worked for the railways even a day in his life – and the tiny steam engine available to get you started does not help much either. You travel from town to town in the 19th century America, buying low and selling high, picking up passengers, contracts and quests along the way – anything to get ahead. As you progress you gain access to larger trains, larger carriages as well as faster and stronger engines. You also gain the means to protect yourself and your goods from bandits and Indian raiders that randomly attack you in between destinations.

If you have enough funds available – which will certainly be the case in the latter half of the game – you can buy off any would-be attackers. A handful of battles that are linked to the campaign cannot be avoided and these make it amply clear that avoiding battle the rest of the time is the more viable option. People get hurt and unless you can heal them during the battle, it takes forever to heal up in one of the game’s hospitals. Your carriages and train will also get damaged. Repairs are not that costly in funds, neither is the healing for that matter, but waiting around for days is costly. You can try and outrun your enemies to avoid some of the damage by assigning someone to drive the train. Unfortunately, the character that drives is more likely to get shot at and the track usually has bends that hurt the whole train unless you slow down before them. I understand this was meant to offer a bit of variety and excitement but it just doesn’t pan out that way.

Towns are split up into three connected screens. You arrive at the station and see the town behind it. Every town has a town hall and a post office and most have one or two additional places of interest such as a bank, saloon or gunsmith that you can interact with. Passengers with specific destinations and quest givers can be found here too. Connected to the station are a depot where you can buy and repair carriages and engines and a market where you can pick up trade wares. It works rather well and switching between the screens is a wonderfully snappy and smooth experience. I can virtually guarantee you’ll be going back and forth several times each stop, working out how to combine quests, delivery contracts and market goods in the most profitable way.

All of it is a good bit of fun early on but it grows rather repetitive half way through the game. The main drive of the game is getting those shares and that is what keeps things going. Especially the timed missions to keep shares from falling into your adversary’s hands can give that extra bit of excitement, but once they are gone it’s back to trading again. Less than half-way through, you’ll have traded up to the most badass train, have carriages of various types sitting around in a number of depots and will likely only have the mortar carriage on your todo list, but cannot justify adding its hefty extra weight to your train for fear of bogging it down to the point that you have to leave valuable goods sitting in the market. And did I mention you will only ever own one train, and that trade does not impact the prosperity of the towns?

About half-way through I reached the point that I kept on going for the sheer sake of completing at least one play-through. By then, the gameplay bordered on being boring and Bounty Train does little to liven things up. Irregular auctions to buy businesses or stock packages break up the monotony but it’s very so-so. Owning businesses seems tacked on as an afterthought as they are barely represented in the game. Some produce a handful of goods, others a tiny bit of cash but if it weren’t for the blue icon hovering over the town you would hardly know it was there at all. Even with the boost that some businesses give to each other, the investment in them hardly seems worth the time, money and effort.

Which brings me to the common thread in Bounty Train: very little of what you do is particularly meaningful, or interesting for that matter. Sinking cash into businesses that don’t contribute to your railway empire is one thing, but one of its core mechanics – combat – is largely forgettable. I ended up paying the attackers off whenever possible and regretted when I didn’t almost every time due to having to deal with the damages. Only the story related battles ever get the adrenaline pumping but those are few and far between. Many of the quests that seem likely to involve trouble actually play out without any issues which is a lost opportunity in my book. It could have been fun to create a mobile fortress train with armored carriages, mortars and the like, but that basically means your engine will need all its power to pull those, leaving too little room for goods. On somewhat rare occasions you’ll have to factor in tasks that improve your relations with the town or one of the game’s factions, but reputation management is usually more cumbersome than it is worth.

As charming as it looks, Bounty Train feels a bit empty and uncomplicated. It’s an arrangement of potentially fun mechanics that just fail to gel together into something that is entertaining for more than a few hours. If you don’t mind the idea of mindlessly going from town to town vending your wares, you may still want to pick this up. If you want more, I’d let this train leave the station without you.

Charming to look at, decent writing

Only fun for a few hours 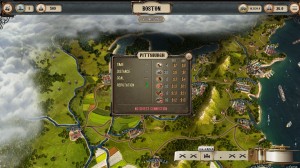 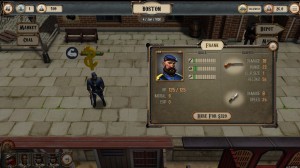 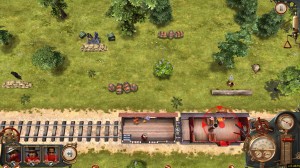 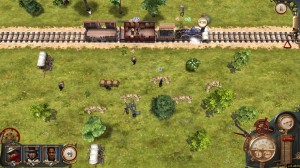 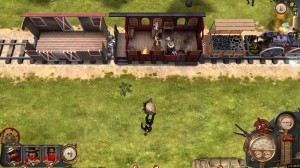 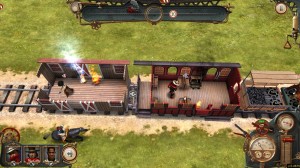 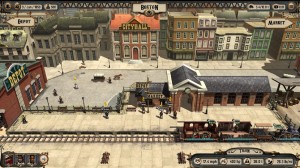 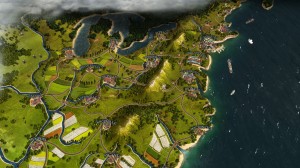 For all the Harry Potter fans out there, Broomstick League is out now on Steam Early Access

Those magnificent animals in their flying machines