The Golden age of gaming

I have been playing games for a long time now, and most new games I play remind me of something I have played previously. Bannerman builds on that reminiscing by creating a game that looks and plays like a game from the golden age of PC gaming - The Microprose / Cinemaware era. Those two companies shaped my gaming life with titles such as Pirates! and Defender of the Crown. And Bannerman has definitely brought back some memories of the latter, being that it involves medieval combat.

In Bannerman, you take on the role of the titular character, the man whose job it is, is to keep the army's banner raised throughout the forthcoming battle. Unfortunately, things go awry and you are wounded in the opening battle. You do manage to survive though, but are shunned for your lack of performance. As the bannerman and armed with your trusty sword, you feel it is your duty to return some pride as you set forth capture or defeat the enemy Lord.

Bannerman is side scrolling adventure that has your character sword-fighting his way through a series of ever increasingly difficult levels. If you’ve ever played the original Defender of the Crown, the sword-fighting will feel familiar to the ‘rescue the maiden’ or ‘steal some gold’ missions in the classic game, as you must parry attacks before thrusting forward with your own counter-attacks.

Along the way, you will encounter a limited range of enemy troops that each have a varied attacking style that must be combated. You will begin by fighting swordsmen with limited skill that take one good swing of your sword to take down, then Axemen with shields that need to be broken before damage can be taken. Pikemen have a longer range and some light armour and can take some patience to take down. Generally, these all appear alone, and as long as you can evade their attacks, you’ll be able to come through a battle unscathed. Archers, on the other hand were a pain in the arse. Man, I grew to hate them, shooting at me from a distance with their unlimited supply of arrows. Some are also equipped with a sword, so that when you get close enough they will swap weapons and begin attacking. And when they are situated behind a melee opponent, things can get frustrating. Having said that, they did provide me with more of a challenge than most of the other enemies.

Along your journey, you will learn various skills, including the ability of improved evasion from the arrows of these archers, but even then they provide a challenge as you need to get the timing just right in order to do your best impression of Neo from the Matrix. Other skills learned with (insert skills here). These skills come in handy when taking on the game’s boss characters. The first encounter is a hulk of a man, not dissimilar to the Mountain from Game of Thrones, who is slow, but powerful. The fact that he is unarmoured makes things a little easier. A wizard who casts shadow swordsmen and casts firebolts is a step up, as he also has the protection of a lightning shield. The final boss is a massive challenge and requires use of all the skills you have acquired throughout the game. There was definitely a feeling of satisfaction upon taking him down.

To help things along, apart from learning the various skills, players can pick up shields and armour that can help give themselves a small hint of protection. These shields and armour can be accumulated throughout the course of a mission, but for some reason do not carry over to the next mission, meaning that you’ll have to go searching for new gear. An armourer can occasionally be found throughout your journey and he can fix up any damaged armour, but he rarely shows up when you actually need him. You also have a health and stamina bar. Stamina gets used up when wielding your sword and can be regained with a small rest. Health on the other hand, does not regenerate, causing a little bit of grief on the longer latter levels.

Bannerman also makes use of a few puzzle elements. Although rather basic, the gate switches and other simple puzzle elements allow for a change of pace from the slashing through swathes of soldiers. Personally I would have liked to have seen more of these elements included so that the game required some more thought than simply slashing at the enemy. There are also some dialogue choices throughout the game, and some of these seem to have an impact on future sections of the game.

The developer has gone back in time to produce a retro 16-bit style pixel-art game. I mentioned that the swordplay seemed to have come straight from Defender of the Crown, and so do the graphics. Our hero scrolls smoothly across the screen in all his pixelated glory, moving through various settings. Bannerman also has simple icons displaying health, stamina and armour, allowing the gamer to glimpse at them, knowing where they stand. Each location has been given the pixel-art treatment, allowing gamers to be immersed in the retro feel. This flows through to the music and sound effects with tunes that fit the medieval era.

As an older gamer, I did like the retro feel in Bannerman. It had me reminiscing of the aforementioned classics Defender of the Crown and Pirates, building on the sword fighting elements in those games. But the combat soon becomes a tad monotonous and although there are a few different enemy types, there is little difference in their attack patterns. The puzzles are a refreshing break from the combat, but are relatively simple. The visuals and audio fits the retro mould wonderfully, but may be a detraction for younger gamers more used to the high quality graphics of today’s games. Bannerman definitely has some things going for it, but you need to get past the outdated visuals and the somewhat frustrating and monotonous combat. 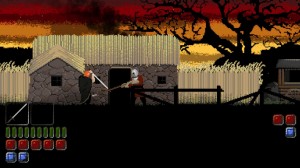