Joy of variety in setting

I am one of those gamers who wishes there were more diverse experiences available in games. The games industry is very international and I constantly wonder why every game has to take place either in a parallel universe or America. Specifically, the middle part of the North American continent. I have become so hungry for stories that take place anywhere else that just the mention of a post-apocalyptic, isometric, top-down RPG reminiscent of Fallout where you play a Russian in Russia doing Russian things gave me a rousing rush. ATOM RPG is that game. It’s a good game but it’s very much a game. The writing is detrimental to the experience, and in an RPG like this one, that’s a very big gripe to have.

The year is 2005. After a nuclear war in the 1980’s, humanity has slowly been rebuilding. Towns have formed – as well as roaming gangs of bandits, of course – and the traditional oversized animals attack everything that approaches them. You are a member of the ATOM organisation, a secret arm of the military that’s been getting ready for the task of rebuilding the Soviet Empire since even before the war. A major in your organisation goes missing and you are sent into the wastelands to look for him. And this is where the bad writing really takes the stage. However, before we get to that: gameplay.

Run away from rats and caves!

Most of the gameplay involves clicking on the map to have your character go there and look for a hidden stash for loot or a car boot in the hopes of finding something useful. One feeling they’ve captured perfectly in this game is the feeling of emptiness. Ammo is rare and as this is not the future, you don’t have any energy weapons. The wasteland is empty, as it should be, and characters to talk to and things to find are few and far between. This, however, makes the joy of actually finding something that much greater.

Early combat sees you pitted against rats, spiders and hornets, but if your melee skills are not up to scratch (you’re unlikely to find a firearm or ammo early on) you’ll end up running away most of the time. Combat is grid-based and you have a limited number of action points to use, so it’s a good thing you have more of them than those early monsters and can get away quite easily, because - despite your extensive military training - you are very bad at fighting. This is doubly pertinent when you get to the world map where random encounters take place. Just don’t run into a cave as I did, ‘cause those things have wolves in them and wolves will eat you. Run away from the caves.

Visually and system-wise the game is great. There’s an intricate skill system that not only has an effect on speech and combat, but on your actions in the game world. I failed a strength test to move a rock behind which I’m convinced something valuable remains hidden, so I tried to use a shovel on it. The shovel broke and now I can’t do any more grave digging until I find a new one. There are things to fix, if you have the skills, and what success there leads to will take me quite some time to find out. There’s a hunger system, radiation and poison, as well as resistances and cures for all of the above. As far as the system is concerned, the game is very fun to play, but personally, I tend to play games for their stories.

The writing here is atrocious. Starting with the first thing that happens to you in the game. As the ATOM soldier, you have some equipment. Conveniently, this equipment gets stolen from you on your first night. So, instead of designing around that by giving you this equipment in the beginning and having you, say, run out of bullets, or the weapon breaking without a way to fix it, forcing you to have to adapt to the wasteland (the smart way), ATOM Team have gone with the painfully standard “bandits come and knock you out and steal it from you” approach. Not only that, but as you sit down at your camp fire, your character literally says: “What a nice, quiet evening. Nothing bad can happen to me now!” which made me cringe so hard I broke a tooth.

It doesn’t get much better. Needless descriptions in the text of characters’ appearance, while they’re standing right in front of you, numerous cases of sentences that could have delivered the same amount of information with half the words, grammatical errors galore, etc., etc. As there is no voice-over, all your interaction with the game’s story is text-based, and when the writing is as bad as it is in ATOM RPG, it becomes a chore and all enjoyment of the world is drained out of it.

That’s not to say I’m going to stop playing it. As a system it is a genuinely good game, but as a world into which one sinks oneself, it’s viscous.

Deep, intricate role-playing system. Captures the ‘emptiness’ of wasteland without being boring. Not American

The writing breaks immersion at every step 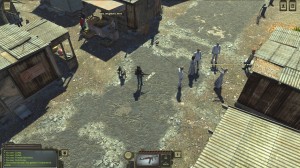 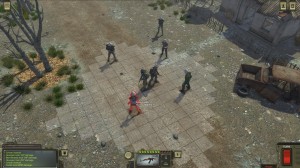 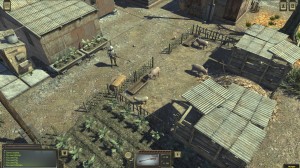 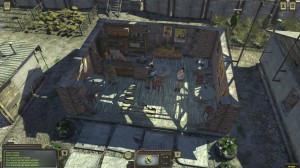 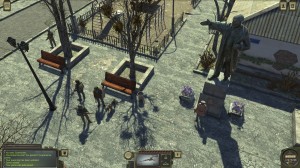 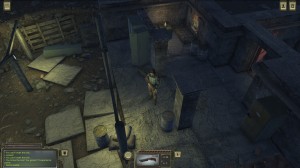