With Anno 2070, Ubisoft gave the popular city building franchise a firm nudge into the future, and not just with its setting. Breaking new ground - or land so to speak - Anno 2070 tasked the player with colonizing not just a single area but numerous locations throughout the globe. To spice things up, players got their feet more than a little wet building structures on the ocean floor as well as on the surface. All these changes served as a welcome refreshment of the timeless Anno concept and Anno 2205 takes some of these elements a few steps further.

The basic premise of the game remains the same. You are in control of one of the game’s factions - or corporations in this case - and are given a number of goals that can normally be reached only when you grow and evolve your population. Things get interesting when you hear the overall goal. I closed my Anno 2070 review expressing the wish for Ubisoft to take us to Mars in the next Anno. My wish came true, almost: we’re taking baby steps and are going to colonize the moon first.

Setting up a colony on the moon is no small endeavour. It requires the combined manpower and resources of multiple locations on Earth to put it all together. This brings us to Anno’s first and most eye catching innovation: an interconnected world. The world map that was first introduced in 2070 makes a return, sporting the tantalizing moon objective in the background. This time though, the colonisable regions and the moon are all woven into a single, interdependent economy.

Not all of the goods and source materials required to reach the moon are available in one and the same location. Producing oranges for OJ is a tough ask in the Arctic climate but certainly a welcome boost of vitamins for its workers. In Anno’s vision of the future certain rare minerals can no longer be found in more temperate climates but are still plentiful in the Arctic regions. More importantly, the energy future of mankind lies in Helium-3, unavailable on Earth but found in quantity on our beloved moon. So colonies in all regions will have to work together, producing essential goods locally and distributing them across all colonies.

Trade between the colonies is a satisfying experience, usually paired with a considerable boost in monetary gains and a potential leap in the level of civilization on the receiving end. But it’s not all glamour here. Setting up the necessary routes is certainly quick and painless, but it is here that fans, myself included, will find their first point of criticism. You see, with the introduction of trade between colonies, Ubisoft has “streamlined away” trade between the islands on a local level. Goods storage is no longer tied to the island where they are produced. They exist on a map level and as long as you have enough you won’t be ferrying around any of them.

This may sound like a minor adjustment but the impact is considerable. Gameplay speeds up considerably but production lines are simplified to the point that it barely matters where you build. Transplanting an entire industry away from your city so that it can grow used to be a wonderfully involved process where you would rearrange storage depots, align manufacturing facilities with semi-finished products and their source materials, provide transportation between islands, calculating a small oversupply to deal with short breaks in the production chain and supplying everything with enough power. Now, all you do is pick a new location and draw a road. You won’t even have to keep track of how much you produce - click on your stored products overview and it will neatly list how much you produce of each good. If it’s in the negative, it turns red and action is required. Easy. Too easy perhaps? For some it certainly will be and Global trade does not make up the difference.

Purist fans will also note the absence of combat in and around their cities. Warfare has been relegated to Conflict Zones, which are essentially mini-games in which you perform combat missions with a small fleet of predetermined ships against overwhelming but static enemy forces. You can earn some extra resources that can be used to upgrade production facilities, as well as waste some time while you wait for your bankroll to puff up a bit but there is little more to it than that. Despite Ubisoft’s best efforts to integrate these missions into the overall campaign, they feel like an afterthought and the lack of strife in local regions is sorely missed. You simply move in and build - there’s no one opposing you.

You would think that the above problems would interfere with enjoying the game but that is not the case. The ambitious goal of colonizing the moon speaks to the imagination and zipping from one map to another to work on improving the individual economies is heaps of fun. To keep things fresh, the three biomes each have slightly different requirements for their infrastructure which forces you to carefully consider the layout of your cities. In the temperate climate, it is pretty much business as usual for veterans of the series, but houses in the Arctic require a heat source to evolve. Mines and factories are the primary heat sources and homes tend to crowd around them as a result. On the moon, energy shields are necessary to protect buildings from small meteor showers that would otherwise damage them. As shields consume a lot of energy and require upkeep, placing these high-tech umbrellas sparingly is as important as fitting the buildings snugly underneath.

Where Anno 2070’s interface could be a little overwhelming at times with several deeply layered menus, 2205’s has been smoothed out to the point that it is difficult to imagine that it can be improved any further. Every type of information is found exactly where you would expect it and construction menus are navigated speedily and without any frustration.

There is a lot to like about Anno 2205. I love the new global economy which, combined with the overall goal of colonizing the moon and achieving endless cheap energy to renew the planet, really drives things forward. The streamlining of the interface has paid off but the same cannot be said about the simplification of trade and the lack of competition on local maps. Had these all-too-important systems remained untouched, Ubisoft would have come awfully close to creating the best Anno in the history of the series and I might have awarded Anno 2205 with a perfect score. If only… 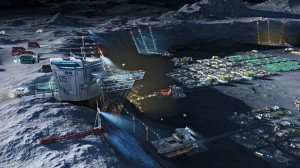 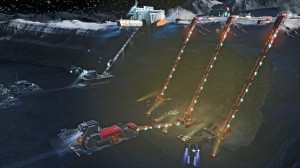 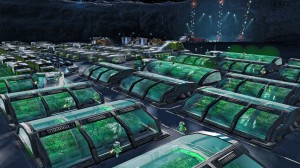 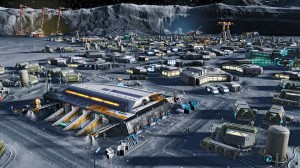 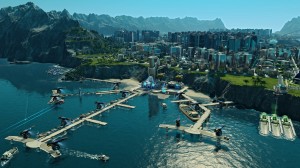 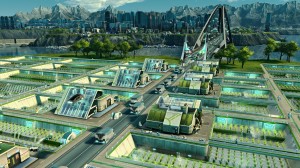 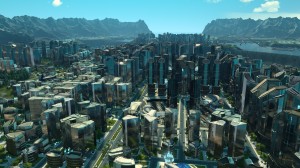