´╗┐
March 21st, 2012 by Marcus Mulkins
If you are addicted to games that are about 90% adrenaline-fueled shooters, I honestly believe that you will just love Mass Effect 3. If you are such a person, stop reading and go off to do something, anything else. Seriously. What I am about to comment on at length will most likely make your blood boil and impel you to screech things like, "What an idiot!" (Oh, wait. Given the adrenaline addiction, maybe you should stick around after all.)

Mass Effect 3 completes this SciFi trilogy and, apropos to the genre, its ending recalls Arthur C. Clarke's classic, "Childhood's End". Not the exact same ending, but the similarities abound. (That is about the nicest thing I have to say about the game.) More on that later.

There are many, many things about this last Act that leave me disgruntled. The entire list is too long to expound upon, so here are the ones that immediately come to mind.

[SPOILER ALERT - there could be some, just saying]

1. We were told that despite the focus on Action, this would still be very much a RPG. Pointedly, it is not. Unless you feel that RPG means actors reading a script. The word is roleplaying, which means that the player puts himself into the character's shoes and then speaks and behaves according to the psych profile of that character. Essentially, if it is acting, it's improv, NOT scriptreading ľ which is what Mass Effect 3 is. 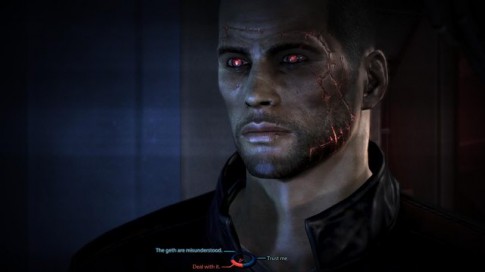 True, dialog choices sometimes split between Paragon (Good) and Renegade (more Chaotic than Evil). But even if there is a different "flavor" to some of the choices, inevitably, your choice selection leads you to the exact same responses from the NPCs that you interact with. For example, "Be a nice guy and please tell me what I need to know" and "Tell me what I want to know or I'll beat it out of you" gets you the exact same answer. RPGs also have mechanisms wherein you "grow" your character in the direction you choose. This is accomplished by continuously tweaking your basic stats and skills/talents as you reach advanced levels of experience.

In the area of skills/talents, choices should cover the broad range of human(oid) endeavor, which means that there are also Social skills as well as combat. In Mass Effect 3, the only things that get tweaked are weapon modifications and Combat skills. Furthermore, provided the character has the money (easy to acquire), Shepard can shuffle his Skill points any time he gets to the Med Bay. He can even buy the Skills of his Companions if he isn't satisfied with the set he started with. So much for "growing" a character; it's more like playing with Silly Putty than "sculpture". If this is roleplaying, then it's roleplaying for warrior robots with very narrow programming parameters.
´╗┐

A Universe of Our Own